There have been several attempts to make a worthwhile Game of Thrones video game, but nobody has been as suited to the task as Telltale Games. Their style of gameplay, revolving almost entirely around dialogue decisions, is a great match for the personal drama, politics, and backstabbing of the series. The company is a natural fit for the IP.

This game takes place after a certain major event from the end of the third season of the television show. It would be nearly impossible to discuss this story-focused game without spoiling some important plot points in the show up to and including that point. This review contains spoilers. It is inadvisable to read ahead or play the game without having watched up to episode 9 of season 3. You have been warned. 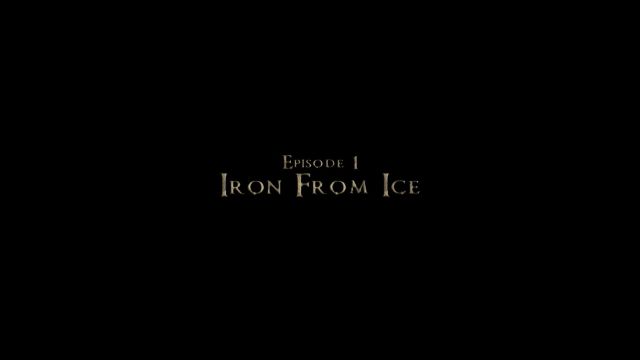 If you've played any of Telltale's recent episodic games, such as The Walking Dead or The Wolf Among Us, you already have a good idea of what to expect from Game of Thrones. You'll spend most of your time interacting with other characters and choosing how your player character will respond. You can explore certain small environments to examine your surroundings, or take part in the occasional QTE battle, but for the most part, you will talk. Decisions you make will affect how people see you, as well as other plot points in future episodes.

You'd think a game about menu selections couldn't possibly have control issues, but in this case, you'd be wrong. For some reason, the cursor moves with a bit of lag. Dialogue options appear in a vertical list, as opposed to a grid like The Wolf Among Us, so the lagging mouse can make the small lines difficult to select. Combine this with the fact that nearly every choice is on a timer and you have a real problem. It was bad enough for me to switch to a controller, where each option is mapped to a face button, which is something I haven't had to do with Telltale's past games. 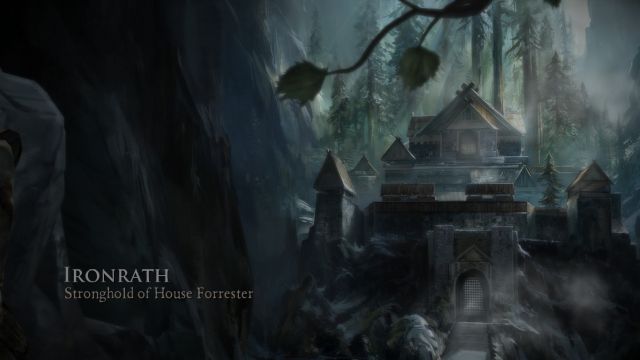 Every Telltale game seems to have its own slightly different art style, and the look they appear to be going for this time is animated woodcarved figures with intricate paintjobs against a painting-like background. Thinking about it this way helps make the weird-looking hair easier to accept, and the game looks quite nice, though the painting filter can make certain moving edges look like they're flickering or muddy, which is distracting. Still, it's a nice game to look at and an appropriate style for the central characters of the game.

Telltale's Game of Game of Thrones follows various members of House Forrester, a family closely allied with House Stark, who are vying for the Iron Throne of Westeros. They, and everyone else, are at war with the currently ruling House Lannister, which means so are the Forresters. House Forrester controls Ironrath, a stronghold in the North, surrounded by the North's largest forest of precious ironwood trees. Ironwood is the strongest wood known to man, making it a valuable resource for creating weapons and armour.

The premiere episode, Iron From Ice, begins at the worst possible time to be buds with the Starks: the infamous Red Wedding, which sees the family's matriarch and only remaining adult son (and his wife and his unborn child and his army and basically everyone else) brutally slaughtered. Your player character for this important moment is a young man named Gared Tuttle, a squire in House Forrester's army and nephew to the house's Castellan, Duncan. 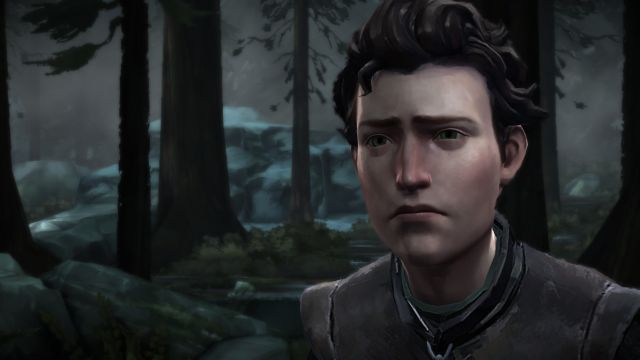 Gared's story is only one small part of the overarching plot, and you'll switch player characters multiple times as the story progresses. This allows you to play in a variety of settings and situations, while also serving to remove any player character's implied plot armour that might lead you to think they're safe. One such character is the young Ethan Forrester, thirdborn son of Lord Gregor and Lady Elissa. With all of the older male members of the family indisposed, it falls to Ethan to act as Lord of Ironrath in their stead. It's likely that the most difficult decisions you will make will come from Ethan's segment of the story. Ironrath has few resources and a more powerful House isn't pleased with something Gared has done, and it's up to Ethan to use diplomacy, bribery, or intimidation to keep his family safe.

The third character you'll control in this episode is Mira Forrester, eldest daughter of the Forrester family, who just happens to be serving in King's Landing (Westeros' capital) as a handmaiden and friend to Margaery Tyrell, future bride of king and all-around terrible person Joffrey Baratheon. (Joffrey is ostensibly the son of the previous king and his wife, Cersei Lannister, but the fact that he's the bastard son of Cersei and her twin brother Jaime is a poorly-kept, not to mention yucky, secret.) Mira may be able to use her sway with the future queen to help protect her family, but only if she can survive and audience with Cersei and her dwarf brother Tyrion. 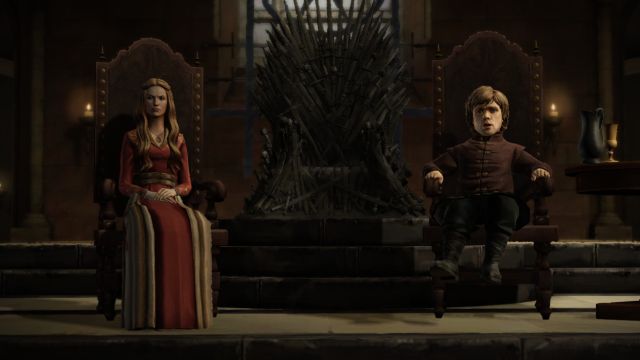 Cersei Lannister is an intimidating character in the TV series, and she appears here, voiced by Lena Headey, her regular actress, with all her fury. Mira's confrontation with her is the high point of the episode, with a huge sense of pressure to tell Cersei what she wants to hear (whatever that is) without coming off as insincere or unfaithful to Margaery. All of the characters from the show who appear in this game, including the three in this scene, are voiced by their actors from the show (everyone else is voiced by Robin Atkin Downes), and this scene highlights their talents. They all transition well to this medium, including Peter Dinklage, who does a much better job in the role that made him famous than he ever did in Destiny.

Naturally, this all leads to a tragic cliffhanger ending that will make you wish Episode 2 was out right now, so let's all join hands and pray that we don't end up with another four month delay like we did between the first two episodes of The Wolf Among Us. Game of Thrones  A Telltale Games Series is an easy recommendation for fans of the show, but should probably be skipped (or at least postponed) by anyone who hasn't yet watched the first three seasons. It's a strong start that shows that Telltale understands why people watch Game of Thrones. Episode 2 holds much promise.
4/5

If you enjoyed this Game of Thrones: A Telltale Games Series - Episode 1: Iron From Ice review, you're encouraged to discuss it with the author and with other members of the site's community. If you don't already have an HonestGamers account, you can sign up for one in a snap. Thank you for reading!