The previous entry in Telltale's Game of Thrones series was a bit slow. Not much happened to progress the story, but the same can't be said for Episode 3: The Sword in the Darkness.

This review is for the third episode in the series, meaning it spoils the previous two. The episode itself also spoils events well into the fourth season of the TV series. See the reviews for the first and second episodes if you don't want to be spoiled. 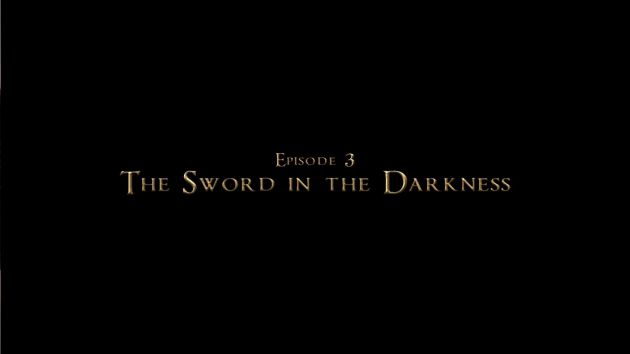 The episode opens with Asher and company on the run from the Lost Legion in Essos. It's here that we finally see one of the actual fantasy elements in the Game of Thrones series when Asher's party is accosted by a dragon. Series fans know what that means. We'll meet you-know-who by the end of the episode.

As always, Asher's story contains lots of action. The Telltale standard who will you save? moment finally occurs, though the game isn't quite ready to kill any of Asher's friends off yet. That doesn't mean nobody will be mad at him, though. 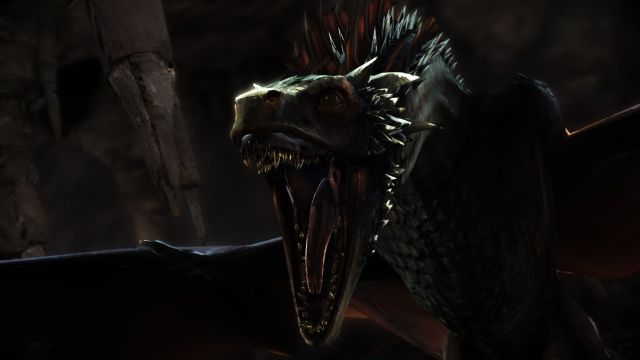 Meanwhile, back at the Wall, Gared is being sworn in as a member of the Night's Watch proper. He's a Ranger, just like he wanted. His uncle Duncan shows up to give him a reason to ruin everything, because anything is more fun than spending time with Jon Snow. It turns out the secret to saving House Forrester might be hidden north of the Wall! How convenient! Less convenient is the fact that Gared will have to break from his patrol group to search for this mythical hidden grove of ironwood. Too bad the penalty for desertion is death. In a nice twist, Gared is given the opportunity to deal with Britt Warrick, who is responsible for slaughtering Gared's family in Episode 1. Less nice is the fact that your actions don't really seem to matter here. Britt's fate is sealed no matter what you do.

At King's Landing, Mira is preparing for a certain colourful wedding that happens a season after the Red Wedding from Episode 1. Telltale does a poor job of conveying the fact that so much time has passed between the first and third episodes, but here we are. In the aftermath of the wedding, Tyrion Lannister is public enemy number 1. He's prepared a decree to buy ironwood from House Forrester, but unfortunately for Mira, it's sitting on his desk. This causes two problems. First, it's a document that ties Mira to Tyrion, and that's not good for anyone hoping to fly under the radar. Second, since it hasn't been sent off yet, it won't even do House Forrester any good. After an entertaining stealth section, Mira is given the option to either burn the decree or hang onto it. It remains to be seen if this makes any difference in how things eventually play out. 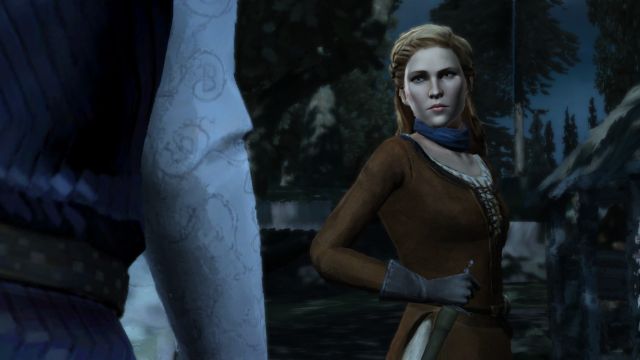 Rodrick continues to have his crippled hands full at Ironrath. He knows he'll have to be submissive to keep his family safe. During a secret meeting with Gwyn Whitehill, daughter of the enemy House Whitehill, Rodrick learns that there's a traitor in his inner circle feeding information to the Whitehills. You're left to wonder about who this is. My money is on whoever you didn't choose as your sentinel in the first episode. Later, when Talia is in trouble with Gryff Whitehill for some silly reason or another, it's Rodrick who has to face him. This is your opportunity to either stand up for yourself and probably make everything worse, or submit and hope Gryff will behave himself if you stop hurting his pride. It's interesting to look at the stats here. In the previous episode, most people were too stubborn to give Whitehill any satisfaction. In the third episode, most players were willing to eat some dirt for the greater good of the family. It seems that players are getting worn down along with Rodrick.

Sometimes it feels like the Game of Thrones TV series starts and ends seasons strong, without too much happening in between. There was some fear of something similar happening with the Telltale series with last week's somewhat unimportant episode, but things are moving along well in this current one. So far it seems to be a series worth sticking with, though maybe it would have been fine as a five episode series instead of six.
4/5

If you enjoyed this Game of Thrones: A Telltale Games Series - Episode 3: The Sword in the Darkness review, you're encouraged to discuss it with the author and with other members of the site's community. If you don't already have an HonestGamers account, you can sign up for one in a snap. Thank you for reading!