Telltale's Game of Thrones series keeps up the momentum in this fourth episode. Most members of our cast are ready to take action, with varying results.

As always, this review spoils some plot points of the TV series, up to the later part of the fourth season, and as an episodic game, expect certain happenings from previous episodes to be spoiled. Pop back to the first, second, or third episode reviews if you're not ready for this one. 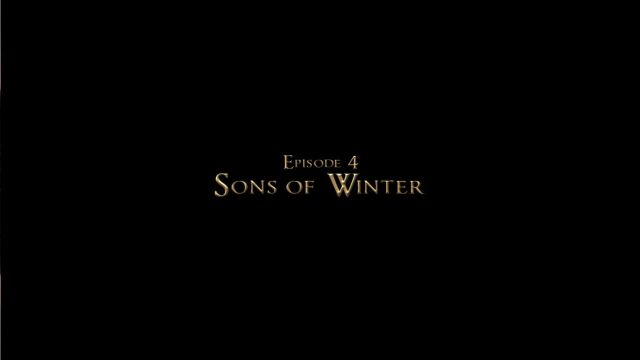 After last episode's cliffhanger involving Gared, it's no surprise to see that he's in deep trouble. After the death of Britt, Gared is considered untrustworthy and a traitor. Oddly, the Night's Watch doesn't have a proper dungeon, so escaping from the store room you're locked in is no huge task, with a bit of help. From here, Gared and Friends can finally head beyond the wall to hunt for that fabled ironwood grove. (Cotter is a Wildling, so it makes sense that he would come along, but it's not clear why Finn is so eager to throw his entire life away to go with Gared.)

In Essos, Asher and company have reached Daenerys, who is having a hard time believing that her dragon, Drogon, would attack anyone without good reason. She's willing to consider Asher's request for a contingent of sellswords, but only if the group agrees to help her take Meereen and free the slaves there. Fans of the show will remember this event.

Beskha is unwilling to go along with this, but refuses to explain why, which will not stop her from complaining when Asher agrees to these terms. She'll reveal that she actually has a pretty good reason to want to sit this one out, but she'll come along anyway, and, yes, this reason will get in the way to some extent. Asher's mission in Meereen is a decent stealth section followed, as always in Asher's segments, by an entertaining QTE action sequence. 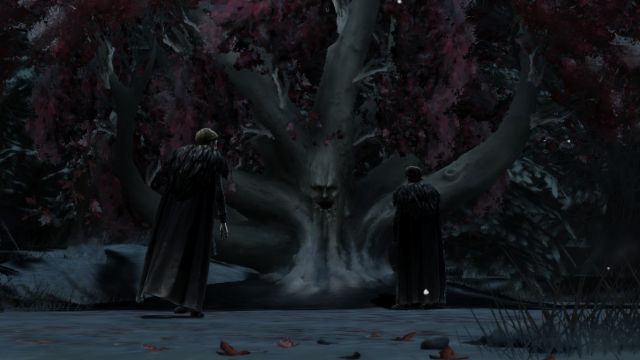 Despite Asher's Essos Adventure, it's Rodrick who stars in the best moments of this episode. While learning new swordfighting tricks from Royland, his (former?) fiancee Elaena appears with her brother, Arthur, and a small squad of soldiers. She's willing to give them to Rodrick, on the condition that he use them against Gryff to stop her forced engagement to him. Yes, things happen off-screen sometimes.

Here's where Rodrick gets to take part in what might be the most satisfying scene since the Purple Wedding. Using your new swordfighting techniques and your small army, you can bring Gryff to his knees. From here, whether you brutalize him or show him mercy is up to you. Even if you've been careful up to this point, it's difficult not to just pound the tar out of him. Either way, he's going to the dungeon, with plans to be used as a bargaining chip to get little brother Ryon back from Ludd Whitehill.

Compared to other episodes, Mira's contribution feels smaller than usual. She'll spend most of her time sneaking into a party (with Sera's help) and listening in on various conversations to figure out what, exactly, is going on concerning supplying ironwood to the Lannisters. This bit of intrigue is interesting enough as it's happening, but simply doesn't feel as important as anything Mira has done before now. It does give Mira an opportunity to act like a bigshot, if that's how you want to play it. You'll also have the opportunity to completely betray Sera while talking to her new suitor, for... some reason. Laughs, maybe? 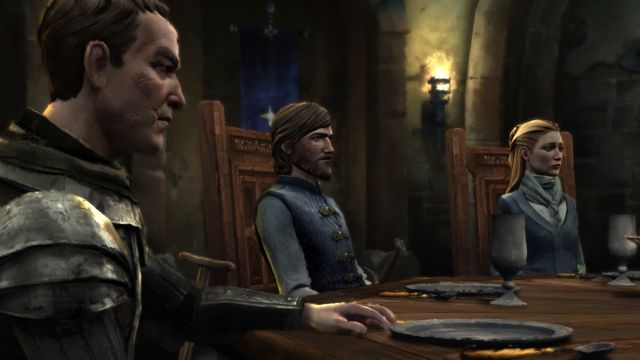 All in all, it's an eventful episodes with some interesting high points. Some people say the choices in Telltale games don't matter because the ending is basically the same no matter what you do. I've never really felt that way. I think how you get to the end is as important as what happens at the end. I don't mind that things only change in the short term. However, this episode has several moments that make it feel like your choices don't matter even that much. You can stop Beskha from drinking too much before the mission, but aside from one line of dialogue, she's fine even if she was completely plastered the night before. You can bring your guards on an errand, leaving Ironrath defenseless, but even if you leave them behind, things are in dire straits when you return. Gared's repercussions for killing Britt seem to be identical, whether he was the aggressor in the previous episode or not. The outcomes of all of these decisions feel natural if you made the "correct" choice (take Beskha's drink away, bring the guards with you, kill Britt on purpose), but it's like they forgot to include the alternative scenarios. I'm hopeful that things like Gryff's physical state and Mira's letter from Episode 3 will have at least some effect on some later scene, but this episode feels like it mostly lacks that tailored experience that Telltale games are supposedly about. It's still a good story, but they're beginning to really drop the ball on what little agency the player had to begin with.
4/5

If you enjoyed this Game of Thrones - A Telltale Games Series Episode 4: Sons of Winter review, you're encouraged to discuss it with the author and with other members of the site's community. If you don't already have an HonestGamers account, you can sign up for one in a snap. Thank you for reading!