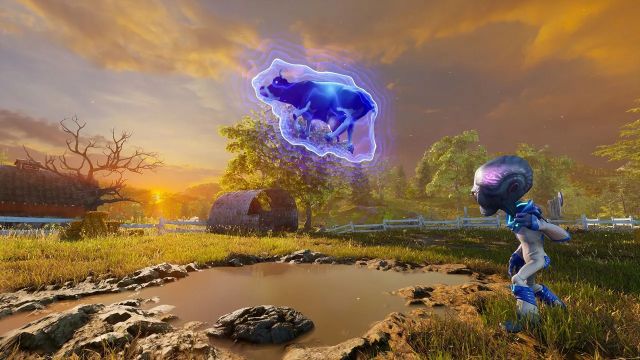 As games go, Destroy All Humans! was always a little bit vulgar. First available on PlayStation 2 and Xbox way back in 2005, the game returned in visually upgraded form in 2016, and after that received a proper remake that has now reached Nintendo Switch.

Developed by Black Forest Games, the remake of the Pandemic Studios original reached PlayStation 4, Xbox One and PC this time last year. It allows players to assume the role of the evil Crypto-137, an alien intent on harvesting human DNA and bringing down the US government.

On Nintendo Switch, the game includes all available skins that were created for the remake as it reached modern platforms, including the Skin Pack DLC.

While wrapping up last year's review for the PC release, EmP wrote that, "Destroy All Humans has been carefully taken apart and put back together so that, while all these things happened back in 2005, theyre replicated in todays finery." He awarded the game a perfectly thrilling 4/5 stars, and probably wasn't even influenced by the irrational fear that someone might come along and probe him if the score were any lower.

If you live in Europe, note that two special physical editions of the game are available: a Crypto-137 Edition that includes a figurine, backpack, keychain, lithographs, an anti-stress toy, all packaged in a premium box for 399.99 | £349.99, and a DNA Collector's Edition with a lot of the same stuff but no backpack and a different figurine. The latter edition retails for a more modest 149.99 | £139.99.

If you've missed playing a version of Destroy All Humans! up to this point but you like sandbox mayhem with bite, this might be the perfect time to make up for that indiscretion. If, on the other hand, all that talk about probing made you uncomfortable, you're probably best off steering clear. You can't say we didn't warn you!

If you enjoyed this Destroy All Humans! article, you're encouraged to discuss it with the author and with other members of the site's community. If you don't already have an HonestGamers account, you can sign up for one in a snap. Thank you for reading!

© 1998 - 2022 HonestGamers
None of the material contained within this site may be reproduced in any conceivable fashion without permission from the author(s) of said material. This site is not sponsored or endorsed by Nintendo, Sega, Sony, Microsoft, or any other such party. Destroy All Humans! is a registered trademark of its copyright holder. This site makes no claim to Destroy All Humans!, its characters, screenshots, artwork, music, or any intellectual property contained within. Opinions expressed on this site do not necessarily represent the opinion of site staff or sponsors. Staff and freelance reviews are typically written based on time spent with a retail review copy or review key for the game that is provided by its publisher.