Destroy All Humans passed me by in its original iteration all the way back in 2005, but even without me, it gathered a strong enough following to warrant a direct sequel and two spin offs. It was those first two games that really stuck in gamings collective maw, both built by the talented folk at Pandemic Studios, in between making the good Star Wars: Battlefront games. But good things are rarely meant to last; the spin offs were farmed out to lesser developers and fared poorly, Pandemic were acquired by Electronic Arts, and predictably closed soon thereafter while IP holders, THQ, went bankrupt. And that would have been the end of it all, but for Nordic Games, buying up the publisher, and morphing themselves into THQ Nordic. In 2016, they would release Destroy All Humans and Destroy All Humans 2 on the PS4 in upscaled 1080p while, in 2018, it joined the Xbox Ones list of backwards compatible games. The most celebrated versions of the game were now available on the most current platforms. That could have been the end of it.

There was no small amount of disparagement in the air when THQ Nordic announced their intentions to remake the original Destroy All Humans from the ground up, under the stewardship of Black Forest Games, rebooters of the Bubsy the Bobcat franchise some years back. That particular project had not gone well, and the lingering failure of Destroys spin-offs made outside Pandemics control seemed an uncomfortable parallel to a resilient fanbase. Turns out, they really had little to fear; 2020s Destroy All Humans walks the ridiculously fine line of celebrating what made the original so endearing while rebuilding the game from scratch to get the best out of modern platforms. 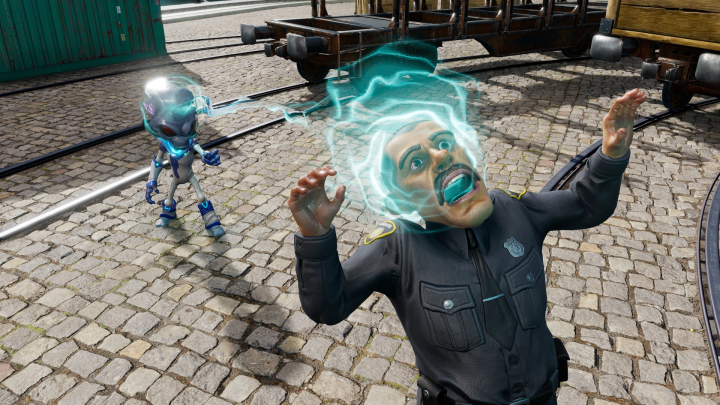 To that end, the remake isnt shy about reclaiming chunks of the original game and fitting them inside its resplendent new world. It takes the original dialogue line-for-line, for example, using the original recordings from the original cast and transplants it into a world both brand new and fifteen years old. Aside from one stage, one rebuilt from ideas that never made it into the original game due to time constraints, Destroy All Humans mission structure is the same as it ever was. This means the modern gamer might get acquainted with some things that are no longer considered in vogue, like fallible states. Some missions ask you to complete an objective without alerting anyone to the fact that youre a rampaging alien, which you can complete by scanning a nearby human and making a holographic disguise for yourself. This disguise will hold up so long as you keep topping up your mental abilities by scanning pedestrians minds. But fail to do that, or stray into the scan zone of a special agent or EMP disruptor, and your disguise will fail.

For the most part, youll be saved by a generous check point system, and full stealth is rarely a strict prerequisite. An early mission asks you to disguise yourself as a police officer so you can skulk through a secure zone in order to take the place of a local mayor and quash pesky rumours of your existence. Its 1950s America, so the best way to do so is to blame communism. Later in the game, you might have to take the guise of a soldier to steal into a military base, or a scientist to gain uninterrupted access to a lab but, for the most part, going native and incognito is a choice. You can choose to move undetected through the human herds, or you can just slaughter them wholesale.

Rooted in glorious B-movie kitsch, your arsenal of destruction ranges from the sublime to the ridiculous. To start with, youre given a zap gun to fry insolent humans with, but you can couple that with telekinetic powers that let you throw things about with the power of your mind. I mean, sure, the zap gun is fun, with targets jittering under high doses of electric shock, but I spent most of the first level trying to kill farmhands with their own livestock. Kill the Farmers Wife with a chicken, the game goads you with its first optional mission perimeter. It seemed only fair to follow it through; the rest of the farm had died under an unforgiving barrage of hay bales and distressed cows. When that hadnt worked, they had been bodily lobbed themselves, either screaming into the air or flung into each other. As the game goes on, more weapons become available; all species have a sphincter, muse the Furon invaders, so why not build an anal probe gun that violates that weakness, travels through the targets body, and explodes their head so you can harvest their sweet, sticky brain stems? 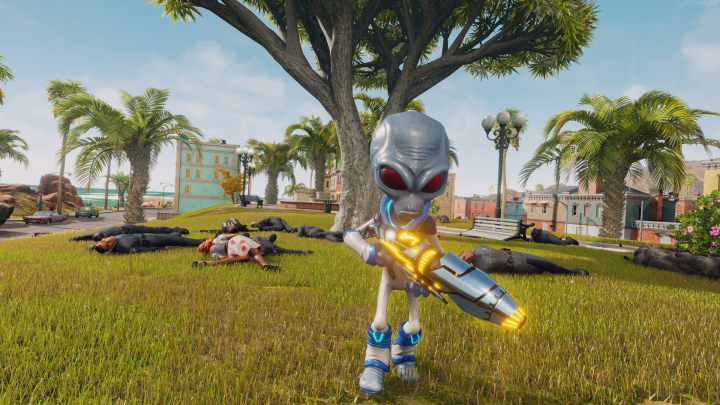 Brain harvesting allows you to stock up on DNA strands, which become Destroy All Humans chosen currency for myriad upgrades. You can spend points on making your shield more sturdy or elongating the lifespan of your holographic disguises or you can use it on something, you know, fun. A fully powered telekinetic skill will eventually allow you to snatch up cars, trucks and tanks, then hurl them back at their passengers or into the throngs of slack-jawed onlookers. The zap gun can chain off targets, frying multiple humans simultaneously. Skills like the ability to mentally pop a humans head so you can collect their brain can slowly turn from an awkward and time consuming single kill to a pandemic where panicking humans can infect each other, coating the very streets with piles and piles of delicious frontal lobes.

With all the avenues of destruction available to you, it was a smart choice to give you the option to either replay any beaten mission (gotta get all the optional asides!) or return to vanquished areas to take part in a little sandbox-themed chaos, air juggling marines or throwing college jocks into lakes. Or taking to the sky in your flying saucer and seeing just how quickly that new death ray upgrade burns down the barn, or how that localised nuclear blast levels entire sections of a city. Returning to sandboxes offer fun little challenges, like following a tractor beam sent down by the mothership, and flinging targets inside it to be abducted or seeing how many humans you can slaughter in a set time. The sense of freedom feels important because, while theres only a little over twenty levels, few do a massive amount to distinguish themselves and theres every chance you might start to feel like youre treading the same path again, regardless of how well you mix up stealth and aggression. 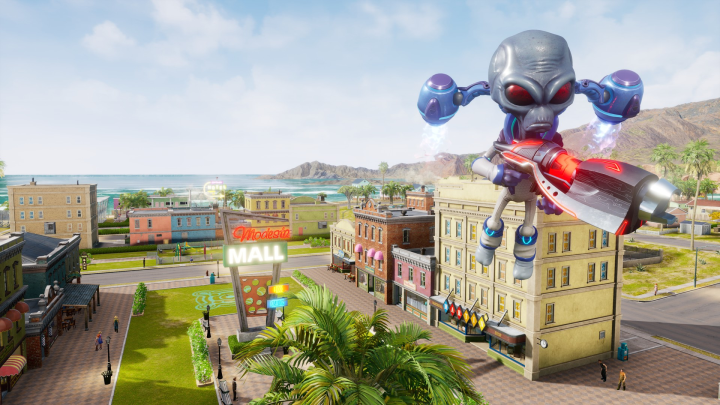 But then youll get little moments like taking on a massive mech boss who has more attacks available to him depending on how well youve alienated the pilot from his military colleagues previously. Or youll find yourself on the steps of the White House, trying to gun down enough congressmen to stop them passing a vote that might be considered a nuisance to your invasion plans. You can sneak into an underground bunker, either by disguising yourself as the local chef and carefully picking through the little pockets set up to demolish your disguise or, screw that noise, hop over the pier on your jetpack and take the entire base on with generous servings of death from above.

Destroy All Humans has been carefully taken apart and put back together so that, while all these things happened back in 2005, theyre replicated in todays finery. Your alien invaders best snarling Jack Nicholson impersonation from back when played atop HD bloodbaths and realistically crumbling buildings. Theres a level of respect and reverence shown towards the original game that grounds it from overplaying its hand or overstaying its welcome. It just lets you get on with being the bad guy for a change. And thats not so bad.
4/5

If you enjoyed this Destroy All Humans! review, you're encouraged to discuss it with the author and with other members of the site's community. If you don't already have an HonestGamers account, you can sign up for one in a snap. Thank you for reading!

© 1998-2021 HonestGamers
None of the material contained within this site may be reproduced in any conceivable fashion without permission from the author(s) of said material. This site is not sponsored or endorsed by Nintendo, Sega, Sony, Microsoft, or any other such party. Destroy All Humans! is a registered trademark of its copyright holder. This site makes no claim to Destroy All Humans!, its characters, screenshots, artwork, music, or any intellectual property contained within. Opinions expressed on this site do not necessarily represent the opinion of site staff or sponsors. Staff and freelance reviews are typically written based on time spent with a retail review copy or review key for the game that is provided by its publisher.