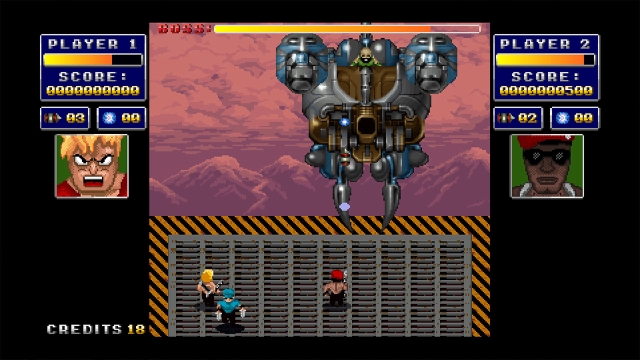 The action/shooter will no longer be a PC exclusive.

Thunderflash, an overhead shooter with side-scrolling stages from developer SEEP, is headed to consoles later this week from publisher Ratalaika Games. The title was previously self-published and released on Steam last year.

At the time, we didn't have a lot of positive things to say about the game in our review, but that doesn't mean the game won't scratch an itch for a budget-conscious consumer looking for something designed with old school sensibilities in mind, especially for $4.99USD.

The game's official release date is February 26 in North America, for Nintendo Switch, PlayStation 4, PlayStation 5, Xbox One and Xbox Series X. In Japan, it will release on February 25 for the Nintendo and Sony consoles, while versions for the Xbox platforms will arrive a day later.

The game lets players step into the boots of Rock and Stan, two commandos who will go up against an army of mercenaries and their advanced weaponry. A criminal organization called Bloody Wolf has designs on world conquest, and you must--alone or with a second player along for the ride--dissuade them while proving you are a truly hardcore warrior. As noted, it's all very retro. Also cool: there's a cross-buy promotion in place with the PlayStation 4 and 5 versions. So, you know, buy one or the other and maybe get twice the bang for your buck!

If you enjoyed this Thunderflash article, you're encouraged to discuss it with the author and with other members of the site's community. If you don't already have an HonestGamers account, you can sign up for one in a snap. Thank you for reading!

© 1998-2021 HonestGamers
None of the material contained within this site may be reproduced in any conceivable fashion without permission from the author(s) of said material. This site is not sponsored or endorsed by Nintendo, Sega, Sony, Microsoft, or any other such party. Thunderflash is a registered trademark of its copyright holder. This site makes no claim to Thunderflash, its characters, screenshots, artwork, music, or any intellectual property contained within. Opinions expressed on this site do not necessarily represent the opinion of site staff or sponsors. Staff and freelance reviews are typically written based on time spent with a retail review copy or review key for the game that is provided by its publisher.