Thunderflash is an homage to the scores of war games the 80s were so in love with: from Commando to Jackal to Guerrilla War, the vertically scrolling variety was immersive in particular, and indie retro lovers SEEP have thrown their hats into the ring with a game, that sadly, in 2020 doesn't live up to titles from over 30 years earlier. Colour me disappointed, but not surprised.

As is the way, you'll take up arms as one of two stereotypical, musclebound soldiers. This time, we've obviously moved on from Vietnam conflicts to delve into "war-torn Kashmir," which has been "transformed in[to] a war zone by a terrorist organization which deploys ruthless mercenaries and devastating military technologies." Yup, shit has gotten real in the region. You'll have the opportunity to bring along a friend locally or with remote play, or else go it alone against difficult odds across the five levels on offer. 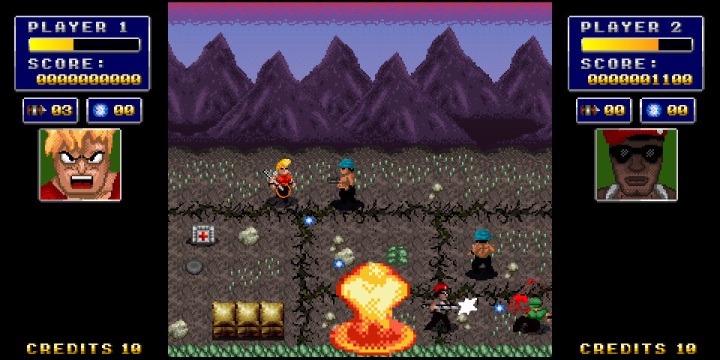 The game provides you with ten credits at the outset, but you'll still have an enormously difficult time beating the game from start to finish; thankfully, you can stage select once a level is behind you, right down to the sub-level (die at 3-2, and pick up where you left off at 3-2, not the start of level 3). Embarking from the stage select still gives you the ten credits, so finishing the adventure in this fashion is a matter of when, not if; victory eventually comes by way of a sloppy battle of attrition.

Once you've beaten the campaign, you might want to try out the Boss Rush, and Survival Modes, which are self explanatory. And then again, you might not. Because as much as Thunderflash looks the part from a distance, it's not what you grew up playing, and that is entirely to its detriment. Some of the expected conventions are present: scores of gun-less grunts will cascade down the screen, knives out, as fodder for your pea shooter. Others will stand still and fire sporadically; others still will rush you while lobbing grenades. You're laughably out-manned and outgunned in these contests, and so the scales are tipped in your favour by two things: bullet range and hero speed.

Thunderflash only gives us one of them. As we would expect, our projectiles tend to reach farther -- across the entire screen -- while most enemy shots fall short. In concert with a quick avatar, our range is meant to be the great equalizer; juke and jive and drop down on the screen and strafe to literally sidestep bullets while returning fire from places enemies can be hit but from which they cannot hit back. But here our character moves slowly and the drop step move doesn't really happen. Dodging incoming bullets only works if you ease the screen forward and know what's coming; only works based on anticipation rather than reflex. 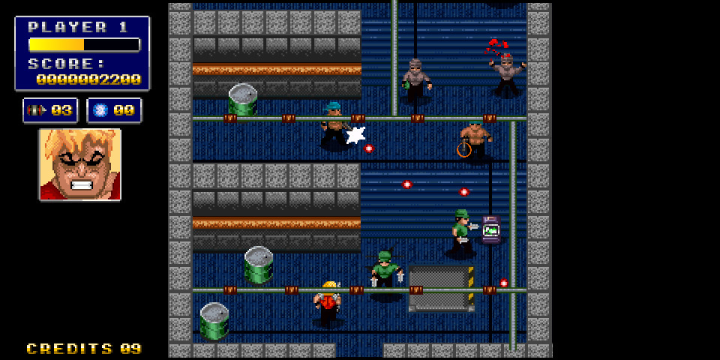 This effectively bogs down play further -- blasting through the first levels of 2020's Thunderflash alongside 1985's Commando is like night and day, and it's a shame, because as I say, the former game certainly looks the part. In the end, the affair is plodding, frustrating, and rough. The best part of it are the few novelty vehicle levels thrown in for variety's sake -- they are extremely easy and as such, a nice break from the languid deaths ensured by other levels, for one reason only: while commandeering the vehicles, you move quickly. You can easily move back and forth and wipe out foes, often before they even get a shot off, and just as easily avoid those who aren't directly in your path.

And so, your experience with Thunderflash will likely be a fairly short but repetitive, frustratingly languorous slog through its campaign using the level select and multiple sets of ten credits to see you through to the end. Then you might try the Survival mode once or twice to see how many hundreds of forever spawning brutes you can machine gun or three-way spread or flamethrower or rocket to death before you succumb to their numbers. Or to boredom at the game's relentless sameness. Or else to annoyance at feeling so utterly handicapped in dealing with what is otherwise such simplistic gameplay. Then you'll want to play something like Guerrilla War to properly relive the good times.
2/5

If you enjoyed this Thunderflash review, you're encouraged to discuss it with the author and with other members of the site's community. If you don't already have an HonestGamers account, you can sign up for one in a snap. Thank you for reading!

© 1998-2021 HonestGamers
None of the material contained within this site may be reproduced in any conceivable fashion without permission from the author(s) of said material. This site is not sponsored or endorsed by Nintendo, Sega, Sony, Microsoft, or any other such party. Thunderflash is a registered trademark of its copyright holder. This site makes no claim to Thunderflash, its characters, screenshots, artwork, music, or any intellectual property contained within. Opinions expressed on this site do not necessarily represent the opinion of site staff or sponsors. Staff and freelance reviews are typically written based on time spent with a retail review copy or review key for the game that is provided by its publisher.