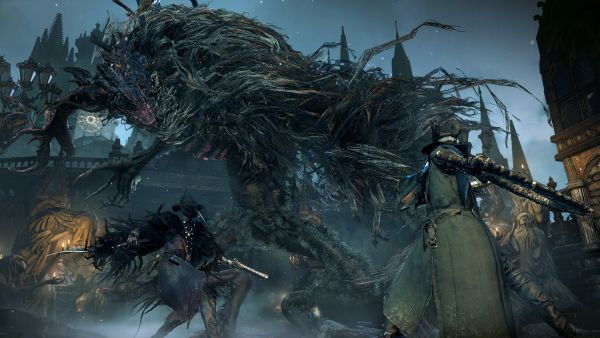 Bloodborne (PS4)- Started this, but haven't done much with it. I died fighting the werewolf thing and gained access to that otherwordly place (name forgotten), nabbed a couple of weapons, and returned to kill the thing. After that, I ran into the night, chopped up scores of "zombies," and eventually killed the Cleric Beast, which led to me leveling up several times. Currently, I'm not sure what I need to do next. I guess exploration will reveal that...

Vessel (PC)- I started this one a while back and haven't returned to it yet. I do plan to pick it up here and there, but Bloodborne is going to be my main focus for now.

Star Ocean: First Departure (PSP)- I accomplished a lot in just a week. I eventually found all of the missing members of my party, switched Mavelle for Erys, and turned the Luxurious Swords in the Muah Treasury into Dueling Swords. I could have gotten better weapons from the optional dungeon near the end of the game, but decided to forgo that. It's a good thing, too, because the final boss was a pushover. Needless to say, I beat the game today. I'm not sure if the SNES version is supposed to be much better, but I wasn't extremely thrilled with this one. At least not as much as I was with The Second Story in the '90s. The lore is fantastic and a few of the characters are interesting, but the story is just okay and the villains are dull and easily dispatched.

Star Ocean: The Second Story (PS)- I restarted this game with Rena as my protagonist so I can obtain Dais (piss off, Leon). Having already beat this title, I probably won't focus as much on it. I do want to get through it so I can review it and (hopefully) move on to Blue Sphere, Till the End of Time, and The Last Hope (the latter two of which are on my backlog).