I love Zombi 2. It's campy, gritty, gory, atmospheric, and pretty much everything a Fulci film should be. Yeah, Ol' Lucio has made some better flicks, but this one is still dear to me. Karlatos' death scene still leaves me speechless.

CRITTERS (1987)
A small town family fights off a horde of menacing, carnivorous aliens with voracious appetites. Meanwhile, a couple of bounty hunters bumble around looking for the creatures, called "Crites."

Critters didn't age very well. That's not to say it isn't a fun film still, but I don't remember there being so many pointless scenes with the bounty hunters, plus I recall there being more horror. Yeah, Billy Zane gets pretty nastily munched, but other than that there's a dearth of scares in what feels to be a halfhearted Gremlins knockoff, but one that's still mildly fun.

Cringe if you like, but I always preferred Critters 2: The Main Course anyway. That's when the franchise seemed to become more self-aware.

HINDSIGHT (2008)
A couple of homeless yokels discover they are pregnant and decide to sell their baby on the internet to solve their problem of not having a permanent home. Unfortunately, the couple they attempt to sell to have ulterior motives...

I've seen this movie on several multi-film packs. In fact, I have two separate packs with this flick on it. Obviously, there's a reason distributors are so willing to let it sell along with a slew of others for a pittance: it sucks. It's poorly shot, filled with instances of ill-fitting humor, and has an unnecessary narrator--one of my biggest peeves. It plays out like a Lifetime Network thriller and isn't tense in the least. Avoid at all costs.

MR. JONES (2013)
A wanna-be documentary film maker leaves the city behind with his girlfriend to produce a nature movie in the woods. There they discover a mysterious artist known only to serious art buffs and collectors as Mr. Jones. He creates and sends strange, monstrous totems around the world and no one knows why. In an attempt to sate his curiosity, the director breaks into Jones' house and tampers with some of his totems and an altar, releasing an unknown evil.

If you couldn't tell, this is a found-footage movie. It starts off somewhat intriguing, with some great psychological scares and a delightful twist. After everything goes to hell, though, the movie loses its punch and fizzles out, becoming a dull, tedious surrealist piece. I understand why all the surrealism, but the pacing shouldn't drop as much as it did. 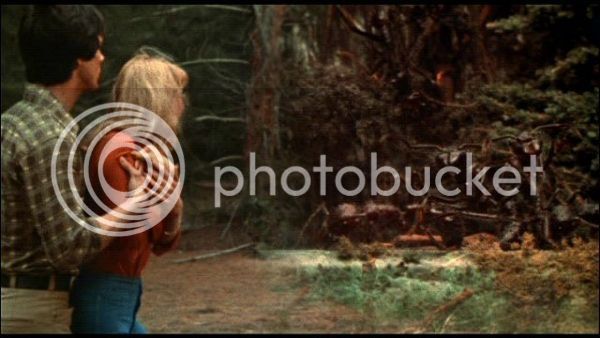 EMPIRE OF THE ANTS (1977)
Based loosely on a story by HG Wells, this one is an old school drive-in flick about would-be landowners scoping out an island resort under construction. While on the tour, they discover that some common ants have grown to mammoth proportions thanks to a steady diet of toxic waste. People run, characters die, and they eventually find the queen...

I love old campy movies like this. Empire certainly isn't Oscar material, but it's so full of wonderful creature effects and old horror tropes that I can't not love it. The only thing that I think needs to go is the irritating screaming noise the ants make.