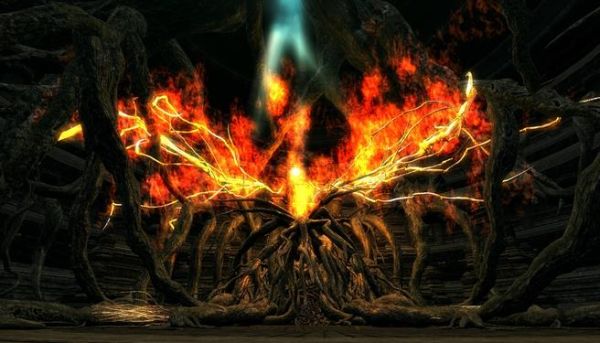 Creatures and traps were plentiful in the ruins. Tons of those statue-globe-dragon-"kinda resembles the baby from Dinosaurs" creatures were there, each of which fell with a single slice. I even came face to face with a Lovecraftian horror, decked out with eyes and tentacles, who didn't pose much of a threat either. A couple of cleaves and that was all she wrote. I made my way down to a tunnel that held a corpse with an item. Before reaching the body, the floor gave way and I found myself in a pit with more of those tentacled creatures. They all died, by the way. I managed to nab some red titanite while I was down there and wondered what the hell the point to this little diversion was. I mean, they could have given you something a little more useful than some titanite (the slab was actually a tad worthwhile, anyway).

I made my way back up, found a misty wall, and moseyed on through. There I hit a stone slide and fell into the clutches of the Bed of Chaos.

I went at this creature thinking it would be your standard boss battle, only to realize it's similar to the fight against the Dragon God in Demon's Souls. You don't engage the monster as you normally would, but have to destroy key bits of the environment to win. I figured that would be the case when I saw two red barriers on either side of the demon (well, and after dying about five or six times because the boss' sweep attack is brutal). I ran to one experimentally, cut through the tendrils, and hacked away at the red core. Hrm, that seemed to change things. Now the Bed has a red wing of sorts, the floors are falling apart in certain areas, and fire occasionally appears. Despite the adversity, I still made it to the second barrier and did the same thing. More changes, more fire, less floor, and I died. Well, meh...

I respawned and anticipated the battle to restart in full. To my surprise, the changes I made in the previous attempt were binding. I didn't have to restart the fight and instead made my way to the obvious plaform in the middle of the boss' chamber, tumbled onto a walkway, and ascended. After chopping my way through more dry branches and roots, not to mentions sustaining a really nasty burn, I found the Bed's core, delivered one swipe, and ended its life. That's two major bosses down, two to go.

A couple of weeks ago (or perhaps it was longer), I purchased the Artorias of the Abyss DLC and aim to not only complete it, but review it separately from Dark Souls. I figured it was time to start that phase of my playthrough.

I returned to the region where I killed the hydra in the Darkroot Basin and slayed the golden crystal golem in the recess behind the hydra's former home. That prompted Dusk the Oolacile to appear, who gave me an important quest to undertake. I will admit that I had to look up a FAQ to figure out what to do next. I warped back to the Duke's Archive and killed a golem there to receive a broken pendent, then returned to Dusk's resting place. There a wormhole had appeared and a tremendous black hand (a la Bayonetta) took hold of me and pulled me into the DLC world. 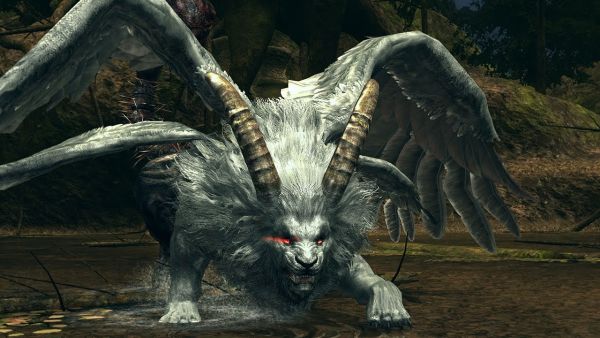 He killed me three times because I attempted to match skill with him. He's a swift little bastard, but he seems to think he's scrappy as well. On my fourth attempt, I decided to humor him and match stregnth with him, fighting a battle of attrition. That didn't go well for the Guardian...

I pressed on to another bonfire and tried my hand at the Royal Wood. There are several greataxe wielders there who can crush you with a blow or two. Since I'm too lazy to look their names up, I've dubbed them axeholes. I found that there's a way to one-shot the axeholes if you're lucky. Most of the time, I'm not. I did, however, get past them at one point and made it to a bridge. The calm after facing all of those axeholes was wonderful, and I relished the peace and-OHSHITOHSHITOHSHIT!

A huge black mass flew up out of the ravine beneath the bridge and perched on it. I'd heard of Black Dragon Kalameet, but nothing prepares you for seeing the thing--bear in mind that I didn't bother to Google Image the thing before getting to this point. I don't look forward to eventually fighting it.

I didn't do much more after that, mainly because I want to work on Onikira: Demon Killer so I can review it. Let's hope I can last against the rest of the DLC bosses.