Right? When you see the straightforward name Labyrinth slapped onto a retail release, it's really hard to accept that the game purely consists of going through a series of corridors. Even then, there has to be some added depth or silly element implemented, like being a dungeon crawler or a puzzler based on a board game. I mention those two specifically because, whenever I tried doing research for Labyrinth, even when I included "Nintendo DS" and "Taito", search results always try directing me to Deep Labyrinth or thinkSMART Labyrinth, as if the game I'm looking for never existed. Note to publishers: if you're going to change the Japanese name, don't rebrand it to a generic word that not only has been used for other games, but also makes it hard to look for in search engines. Better yet, go for something unique or goofy, such as Cameltry, a 1989 Taito arcade game that actually serves as the predecessor to this Nintendo DS release.

The name doesn't make one lick of sense, and the only reference the game makes to a camel is at the title screen, where the M is designed to look like the two-humped animal. But screw it! Cameltry! And for being just a sequence of interconnecting walls, the game does a couple quirky things to warrant a play, like the fact you need to move a blue marble through several mazes by twisting a dial controller, identical to the one used in Taito's other IP, Arkanoid. There's a catch: you use the dial to rotate the maze, not the marble. With this element, you must guide the ball carefully and precisely to each goal, as dragging it along surfaces slows it down, and of course, there's a time limit for added tension. There's also various obstacles along the way, featuring bumpers, blocks that must be destroyed with momentum, barriers that open and close at intervals, blocks that detract time, and speed strips that go in opposite directions. 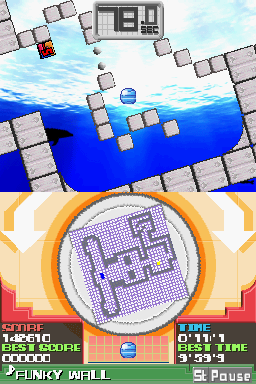 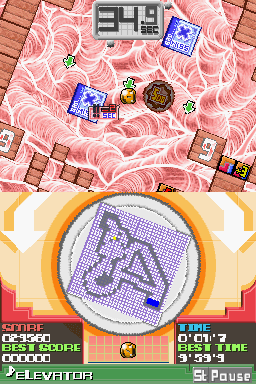 Labyrinth pretty much retains all these mechanics, even attempting to mimic the wacky music and the weird background images, like a close-up shot of an asteroid in space and what appears to be a black and white, blurred photo of a press meeting. Though, clearly, the dial couldn't be replicated, but the devs here make up for it with several control setups, like pressing Y and A or L and R for left and right rotations, the latter being the most effective. Or, for some reason, use the stylus on the bottom screen to twist and turn the maze, which isn't ideal in a game about precision. As for another addition that probably sounded better in writing, the bottom screen is also home to maps that are slightly confusing to look at due to the way they're tiled and the absence of obstacle placement, not to mention they're pretty much unnecessary in a game that requires your concentration.

For a total of 40 mazes spread across six courses, Labyrinth seems like you're getting some good value for an interesting-sounding maze product. But then you start playing, and realize how ridiculously easy everything is, to the point where I'll say that a good, maybe, 25 or so mazes can be finished with just a scant few rotations and little opposition from obstacles. At first, I thought it was because I was in the early courses, but the nonsense continued in the harder ones, which feels very contradictory when you're currently going through a course labeled Expert. Shoot, the only reason some mazes seem challenging is because you have no clue what your marble is going to hit the first time you go through them, and since there's no legitimate punishment for failing, you can easily dominate them on second tries.

The game is even a bizarre case where learning to play better actually damages the overall design. You can actually rotate at a speedier rate if you combine buttons, such as pressing Y and L at the same time for a sharp left turn, a valuable ability when making tight turns. You can also make your marble travel slightly faster when hitting the "jump" button, which propels it just a teeny bit with each press. There's no drawback to doing this, which is odd considering Cameltry actually penalizes you with a big rebound if you manage to hit a wall. Interestingly, this very same move is the reason I almost never completed Labyrinth, since two late mazes force you to use its fully-charged attack to break through concrete blocks. You'd think this is done by mashing the "jump" button, but this only resets the charge-up, and both the in-game instructions and booklet give very loose, nondescript tips on the matter. The solution? You have to pause for a second between "jump" presses... Thanks, superspudz GameFAQs message board user! 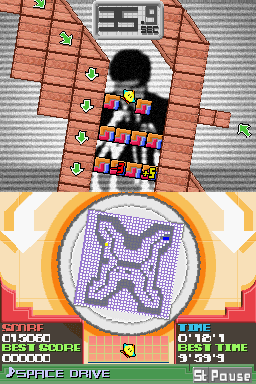 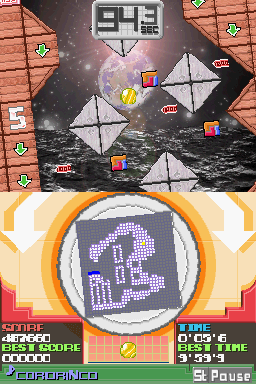 Chack'n... I'm so sorry you had to make a cameo in this game.

So, yeah, it's easy enough on its own, but when you know how to use these skills, you can brute force your way through a good chunk without much effort. The jump move can be abused to phase through speed strips that knock you back, which feels completely unintentional since entire mazes are dedicated to speed strips. Its charged form, too, can break through a stack of blocks without a problem, not to mention obliterate concrete blocks for shorter routes, in, erm, mazes that are already short to begin with. I mean, Cameltry isn't a super challenging game to begin with, but in comparison to Labyrinth, it tries. For example, Cameltry actually attempts to have bounce physics, something its successor oddly lacks, which, when combined with the rebound you get for speeding, makes for a slightly more tense situation.

Being the second Taito "revival" game I've played on the Nintendo DS, followed back to back with The Legend of Kage 2, to say that I'm grossly bummed out would be an understatement. Both titles share a similar theme of faithfully mimicking their predecessors, but drops the ball hard when it comes to actual quality gameplay. I thought this was just a disturbing coincidence until I discovered the same dev team, Lancarse, worked on both games! Stranger yet, when I combed the games they worked on to check if there was more garbage, I was thrown for a loop seeing Etrian Odyssey and SMT: Strange Journey listed. I, um... stick to making RPGs, I guess? To end on a more positive note, probably Labyrinth's one defining feature is its four-player multiplayer mode that only needs one game card among four portables. Now you just need to persuade three people to play this with you...
1.5/5

If you enjoyed this Labyrinth review, you're encouraged to discuss it with the author and with other members of the site's community. If you don't already have an HonestGamers account, you can sign up for one in a snap. Thank you for reading!

© 1998-2021 HonestGamers
None of the material contained within this site may be reproduced in any conceivable fashion without permission from the author(s) of said material. This site is not sponsored or endorsed by Nintendo, Sega, Sony, Microsoft, or any other such party. Labyrinth is a registered trademark of its copyright holder. This site makes no claim to Labyrinth, its characters, screenshots, artwork, music, or any intellectual property contained within. Opinions expressed on this site do not necessarily represent the opinion of site staff or sponsors. Staff and freelance reviews are typically written based on time spent with a retail review copy or review key for the game that is provided by its publisher.