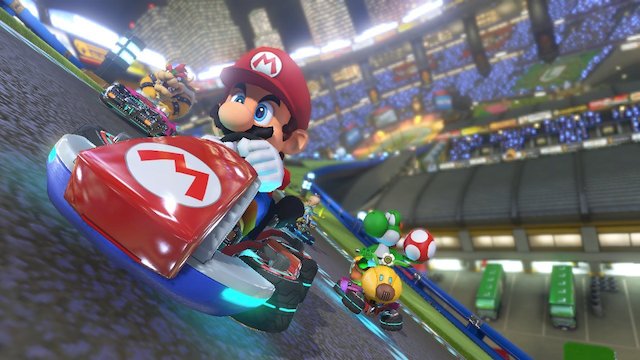 When available, which was true in all cases but one, I've linked to my reviews for the games listed. They'll open in a new window if you click the hyperlinked titles, just in case you'd like further reading. All but two of those lead to reviews here at HonestGamers, while the other two are my freelance reviews at GameSpot. I probably need to spread myself around a bit more in 2015, or at least review more first-rate games for other outlets.

01. Mario Kart 8 (Wii U)
I played a lot of this one with my friend, but I still haven't reviewed it. I will likely play it some more before I review it, as well, but I'm in no hurry. In brief, I was delighted by the track selection (there's not really a stinker in the bunch). Some people have complained that half the tracks are remakes of old designs, which is true, but I see those tracks as a bonus. Put the recycled content aside and you're still left with 24 new tracks, as many as you'll find in pretty much any other racing game around. They're a lot of fun, too, and filled with elements that give a Nintendo fan like me the equivalent of a sugar rush. I haven't even taken time to try REALLY mastering them in time trial, or playing a lot online. Finally, there are additional tracks available with downloadable content, along with characters. I love the nods to the classic retro games. Someone on Twitter said Mario Kart needs to hurry up and die already and Nintendo should just release a Nintendo mascot racer. I couldn't possibly disagree more... but I wouldn't mind seeing such a mascot racer materialize in addition to Mario Kart. I'm greedy like that.

02. Elliot Quest (PC)
Seemingly out of nowhere, this game's developer contacted the site and asked us to review the game. I checked out a video and liked what I saw. Then I played it and liked what I played. A lot. It was very nearly my top pick for 2014, in fact. If you missed this one, you should fix that by downloading it from Steam. Or wait for the Wii U edition, if you prefer. I hear one is coming.

03. Kirby: Triple Deluxe (3DS)
I like Kirby games, in general, and to me this feels like the best conventional Kirby game to date. It reminds me most of Knightmare in Dream Land (Wii), but the level designs are somehow more enjoyable and the mechanic that sees players switching between layers was put to excellent use. I bought this game to write a guide for it, so of course I played it quite thoroughly.

04. Professor Layton vs Phoenix Wright Ace Attorney (3DS)
I've enjoyed the Professor Layton games in the past, but I haven't spent as much time with Phoenix Wright as I hope to at some point, despite owning every title that Capcom has seen fit to physically release in North America. Still, this mix of the two franchises caught me by surprise by telling a story that really sunk its hooks into me. The puzzles weren't so great, and the cases did cause frustration here and there, but overall the experience was one of the year's most memorable... at least for me.

05. Shovel Knight (Wii U)
I supported a lot of small game projects on Kickstarter, but I bowed out of this one and that was clearly a mistake. Shovel Knight wound up being a true delight, as I suspected it might, and I even wound up writing a guide for it. I had a lot of fun playing through the title as part of that effort, finding its secrets and figuring out how best to topple its bosses. For an old school gamer, it's one of the best "new" efforts available, precisely because it feels so familiar.

06. Plants vs. Zombies: Garden Warfare (Xbox One)
When I saw teaser video of this title as it was announced, I thought to myself "You know, that looks pretty good!" So I took a chance and bought it upon release, and I had a bunch of fun playing deathmatch with players. When there's an active group going at it, this game is pure bliss. I had other things to do, so I finally had to force myself to stop playing, but I could see myself becoming addicted all over again if I were to return to it.

07. Watch Dogs (Xbox One)
I anticipated this game being a huge deal, so I made writing a guide for it a priority. People wound up deciding that the game was a huge letdown, but I don't agree with that assessment. I loved in particular how fully realized the city was, with tons of little details combining to form a downright immersive experience. It's true that the side missions could get old quickly, but I never really got sick of running around the beautiful playground that is slightly futuristic Chicago. I can't wait to see where Ubisoft takes the series next.

08. NES Remix 2 (Wii U)
I was happy to land this particular assignment, because I spent hours and hours with most of the included games when I was a child. NES Remix 2 assembles a bunch of old NES classics, then asks you to play them in surprisingly new ways. I was pleased to find that my old school skills haven't diminished much at all, at least while playing this particular titles. It should be a treat for newcomers, certainly, but I was especially grateful for the excuse to return to old favorites again, and from a new perspective.

09. Mercenary Kings (PlayStation 4)
If you took Metal Slug and crossed it with Metroid, you'd wind up with something about like Mercenary Kings. I missed the crowdfunding campaign, but this game was released as a free bonus to PlayStation Plus members and I was lucky enough to land a freelance assignment covering it. What I found was a huge, action-packed game with challenging play and beautiful visuals. Definitely give it a shot if you're into that sort of thing... which you should be, because it's awesome!

10. The Witch and the Hundred Knight (PlayStation 3)
This game barely made the list ahead of a few other possibilities. It gets the nod because there's so much of it. Not all of the content is great and the story twists around in some ways that didn't always work for me. Some of the game mechanics are also clumsy. Even so, there's a lot of charm here if you're willing to dig, and there aren't a lot of other games quite like it. If you can find it in a bargain bin, it definitely lives up to that label, though at full price you'd probably do better to skip it in favor of something else a bit safer.