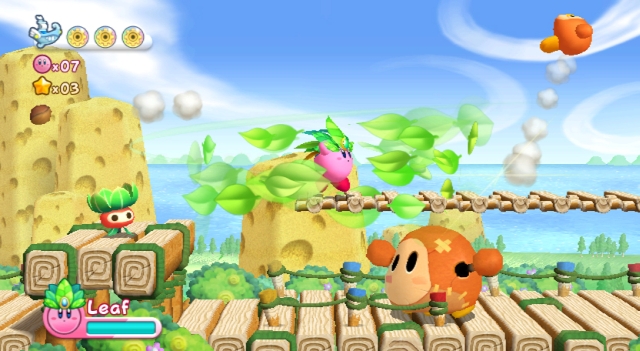 The recent flurry of releases featuring Kirby, Nintendo and Hal Laboratory's famous pink puffball, continues today with the release of Kirby's Return to Dream Land for Wii. Unlike a lot of the other recent titles in the franchise, though, this one doesn't rely on a gimmick. For better of for worse, Kirby is back as you know him.

There will be no wrangling yarn critters here. Kirby once again has substance, suction power and a steel stomach. To complete his newest adventure, you'll run and jump and fly through familiar lush environments, inhale enemies, gulp them down and inherit a number of new abilities. Perhaps most promising is a four-player mode that allows anyone with a Wii Remote to join in on the action.

"Kirby's Return to Dream Land is a must-play for new and experienced fans, and it's only available on the Wii console," said Scott Moffitt, Nintendo of America's executive vice president of Sales & Marketing. "As friends and family gather together this holiday season, they'll have a blast discovering Kirby's new Super Abilities and teaming up to defeat enemies."

The game features only one control scheme. Players hold the Wii Remote sideways, like an old NES controller, and for the most part that's all there is to it. While there's some Wii Remote shaking necessary in a few instances, for the most part Kirby's Return to Dream Land is designed to play out like an old school Kirby adventure but with the polished presentation and features of a 2011 release. For those who have been waiting for a release just like it (a lot of people, it seems), that's terrific news. Perhaps it will even make the wait for The Legend of Zelda: Skyward Sword easier to bear.

If you enjoyed this Kirby's Return to Dream Land article, you're encouraged to discuss it with the author and with other members of the site's community. If you don't already have an HonestGamers account, you can sign up for one in a snap. Thank you for reading!

© 1998 - 2022 HonestGamers
None of the material contained within this site may be reproduced in any conceivable fashion without permission from the author(s) of said material. This site is not sponsored or endorsed by Nintendo, Sega, Sony, Microsoft, or any other such party. Kirby's Return to Dream Land is a registered trademark of its copyright holder. This site makes no claim to Kirby's Return to Dream Land, its characters, screenshots, artwork, music, or any intellectual property contained within. Opinions expressed on this site do not necessarily represent the opinion of site staff or sponsors. Staff and freelance reviews are typically written based on time spent with a retail review copy or review key for the game that is provided by its publisher.