Gaps by POWGI rolls out this week to various consoles 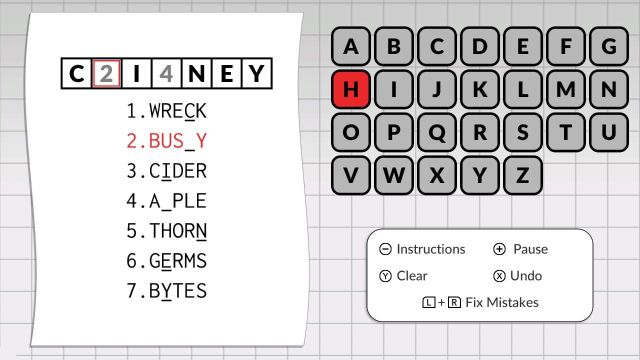 You can find the game on PlayStation consoles right now, and it will soon reach others.

Lightwood Games announced today the availability of Gaps by POWGI on PlayStation 4/PlayStation 5, with crossbuy, and revealed the game is due to arrive on Xbox One and Xbox Series X|S tomorrow. A Nintendo Switch version is due to hit the eShop the day after that, on July 22.

If you're not already familiar with the publisher, the main thing to know is that it produces a regular stream of light puzzle games, usually based on popular word games and often appearing in its "POWGI" line. They tend to reach most current platforms and provide a solid value for their asking price.

Gaps by POWGI continues the tradition. Your goal, according to the developer, is to "fill in each of the blanks in the five-letter words, using letters that themselves spell another word." It sounds kind of like a crossword puzzle but also kind of not.

"There can be thousands of permutations," noted today's quick press announcement, "but there's only one solution."

On PlayStation 4 and PlayStation 5, Gaps by POWGI fetches $7.99 USD, and it seems safe to assume it will go for the same on the Microsoft Store and on the eShop, once it becomes available. Word!

If you enjoyed this Gaps by POWGI article, you're encouraged to discuss it with the author and with other members of the site's community. If you don't already have an HonestGamers account, you can sign up for one in a snap. Thank you for reading!

© 1998 - 2022 HonestGamers
None of the material contained within this site may be reproduced in any conceivable fashion without permission from the author(s) of said material. This site is not sponsored or endorsed by Nintendo, Sega, Sony, Microsoft, or any other such party. Gaps by POWGI is a registered trademark of its copyright holder. This site makes no claim to Gaps by POWGI, its characters, screenshots, artwork, music, or any intellectual property contained within. Opinions expressed on this site do not necessarily represent the opinion of site staff or sponsors. Staff and freelance reviews are typically written based on time spent with a retail review copy or review key for the game that is provided by its publisher.