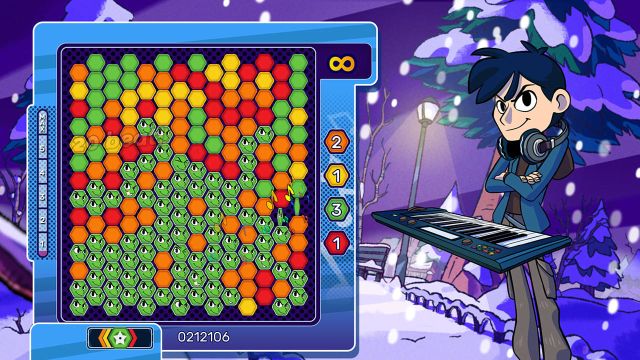 If you have a current console, you can enjoy this coming-of-age puzzle game today.

Indigo 7: Quest for Love is available now on Nintendo Switch, PlayStation 4, Xbox One, PlayStation 5 and Xbox Series X, publisher Dolores Entertainment announced today. Regularly priced at $14.99 USD, the game is currently available at a 20% discount on the Nintendo eShop.

The star of Indigo 7, a young lad named Nathan, travels with his band to a sunny city with hopes of forgetting about a harsh breakup. There, Nathan meets a girl named Debbie and becomes involved in a battle of bands with his friends and some new acquaintances, all on the way to (hopefully) a happy ending.

The game's key features include:

As many as four players can enjoy unique local co-op modes, or you can go it alone against the game's AI. A summer of music and love in a gorgeous new environment? That doesn't sound half bad, does it?

If you enjoyed this Indigo 7: Quest for Love article, you're encouraged to discuss it with the author and with other members of the site's community. If you don't already have an HonestGamers account, you can sign up for one in a snap. Thank you for reading!

© 1998 - 2022 HonestGamers
None of the material contained within this site may be reproduced in any conceivable fashion without permission from the author(s) of said material. This site is not sponsored or endorsed by Nintendo, Sega, Sony, Microsoft, or any other such party. Indigo 7: Quest for Love is a registered trademark of its copyright holder. This site makes no claim to Indigo 7: Quest for Love, its characters, screenshots, artwork, music, or any intellectual property contained within. Opinions expressed on this site do not necessarily represent the opinion of site staff or sponsors. Staff and freelance reviews are typically written based on time spent with a retail review copy or review key for the game that is provided by its publisher.