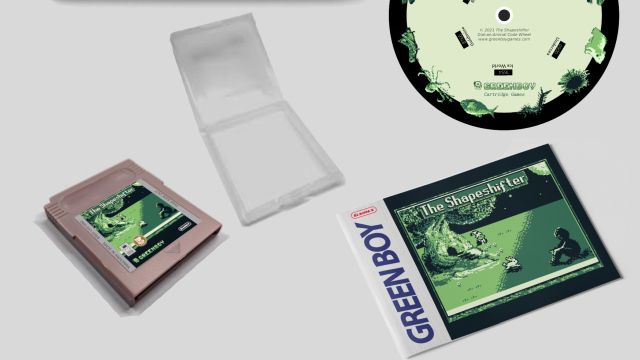 Another day, another Game Boy cartridge on its way to consu-- wait, what?

For some time now, retro-minded indie developer Green Boy Games has been producing new games for the original Game Boy hardware and its compatible successor hardware. The Shapeshifter, the latest in the studio's line of games, is finally available in digital form and the physical cartridges are due to start shipping on July 15.

In The Shapeshifter, players assume the role of Elliot, a boy who meets an elf and embarks on a quest to save the elven world. To do so, he'll change form to become various animals as he explores a strange world.

Included in the game's physical edition are a pocket guide, a collector's coin, protective packaging and even a Code Wheel of the sort that used to ship with old PC games. This should be the first time such an extra has been included with a Game Boy title, even though it took an unlicensed release to make that happen.


The SHapeshifter appears to be the sixth game from Green Boy Games, following the prior release of Where is my Body?, Micro Doctor, Lunar Journey, Submarine 9 and Leo Legend.

You can preorder the first-edition release of The Shapeshifter from the official site for 49.01 EUR, using PayPal. Which, if you've been anxious to find another new Game Boy game to play, sounds like it might not be the world's worst idea. It's not like there's a lot of competition at this point...

If you enjoyed this The Shapeshifter article, you're encouraged to discuss it with the author and with other members of the site's community. If you don't already have an HonestGamers account, you can sign up for one in a snap. Thank you for reading!

© 1998 - 2022 HonestGamers
None of the material contained within this site may be reproduced in any conceivable fashion without permission from the author(s) of said material. This site is not sponsored or endorsed by Nintendo, Sega, Sony, Microsoft, or any other such party. The Shapeshifter is a registered trademark of its copyright holder. This site makes no claim to The Shapeshifter, its characters, screenshots, artwork, music, or any intellectual property contained within. Opinions expressed on this site do not necessarily represent the opinion of site staff or sponsors. Staff and freelance reviews are typically written based on time spent with a retail review copy or review key for the game that is provided by its publisher.