Barbarian: Testament of the Primordials reaches Xbox One and PlayStation 4 this month 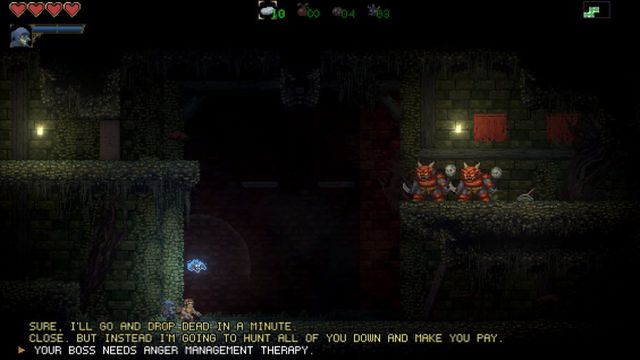 DANGEN Entertainment figures all that success is too much for Switch and PC to handle on their own.

Barbarian: Testament of the Primordials, a 2D platformer with puzzle solving and Metroidvania elements, has done quite well for itself on Switch and PC since its release last year. DANGEN Entertainment and Unspeakable Pixels, its publisher and developer respectively, have thus announced they will make it available also to Xbox One and PlayStation 4 gamers.

Due to arrive on July 15, 2021, Barbarian: Testament of the Primordials presently has an average score of 82/100 from Metacritic, which is certainly nothing at which to sneeze. Apparently, one of its distinguishing features is that it is "snarky."

As the game commences, an unlucky barbarian falls into a deep abyss and must find some way to escape with assistance from a bat named Pip. That will entail exploring hundreds of secret-filled rooms while battling enemies, meeting unruly companions, and offering witty banter to those who cross his path. You know, typical barbarian stuff.

According to a press release, Batbarian offers over 20 hours of gameplay, with more than 10 major bosses and 60 minutes of "pumping" music. I'm picturing lots of bellows and bagpipes, but "pumping" could refer to something else entirely so don't mind me. Oh, and there are a whopping 30,000+ words of dialogue, which now that I think about it sounds like a lot more conversation than I would expect from a traditional barbarian.

Besides the aforementioned snark, another of the game's key features is the way players must guide Pip to solve puzzles. One example offered: players can throw sticky fruit so it lands near a switch, and Pip will activate the helpful switch while he gorges himself on the fruit. It all sounds very strategic.

If you're looking for a Metroidvania with a distinct style, Barbarian: Testament of the Primordials sounds like it could be a great match for your needs. Then again, it might just drive you batty.

If you enjoyed this Batbarian: Testament of the Primordials article, you're encouraged to discuss it with the author and with other members of the site's community. If you don't already have an HonestGamers account, you can sign up for one in a snap. Thank you for reading!

© 1998 - 2022 HonestGamers
None of the material contained within this site may be reproduced in any conceivable fashion without permission from the author(s) of said material. This site is not sponsored or endorsed by Nintendo, Sega, Sony, Microsoft, or any other such party. Batbarian: Testament of the Primordials is a registered trademark of its copyright holder. This site makes no claim to Batbarian: Testament of the Primordials, its characters, screenshots, artwork, music, or any intellectual property contained within. Opinions expressed on this site do not necessarily represent the opinion of site staff or sponsors. Staff and freelance reviews are typically written based on time spent with a retail review copy or review key for the game that is provided by its publisher.