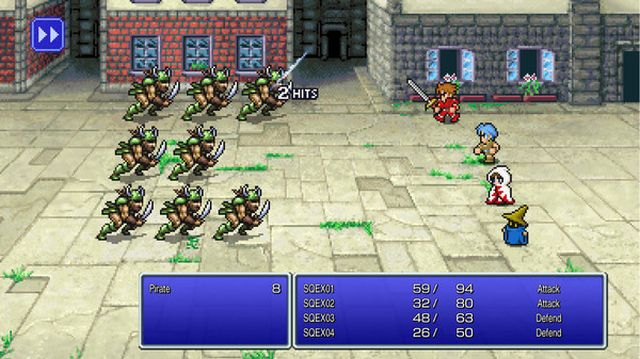 Final Fantasy I-III are headed your way this July, to PC and mobile devices.

Square Enix has announced that Final Fantasy, Final Fantasy II and Final Fantasy III are headed to PC and mobile platforms on July 29, 2021. The games, part of its "Pixel Remasters" line, were originally announced during the company's E3 media briefing earlier this month.

As noted in today's press release, the games in the series will include the following key features:

There's no specific mention of difficulty balancing, though in the past Square Enix has put some effort in that direction. The Final Fantasy Origins collection from 2002 took the generally difficult first two games in the series and offered the option to play them in absolutely neutered form, ensuring even RPG newbies could see their quest through to its conclusion if they were willing to try much at all.

Today's press release included some neat quotes from key talent involved along the way, which we're including below.

"When working on the originals, I didn't think that the Final Fantasy series would be remastered almost 35 years later. The video game industry had only just been established. So, with nobody else leading the way, we had to keep moving forward at the front line. I remember how we went through a lot of trial and error at that time. I'm very happy and grateful that Final Fantasy has continued for such a long period of time."

"Every time a new Final Fantasy title is released, I think there are those who want to return to the origin of the series. This project began because we wanted to create a convenient way for fans and new players to enjoy these original classics, with consistent graphics and a unified user interface."

"We are rearranging all the music tracks this time. One of the first ideas I had was to make sure to stay faithful to the originals, but of course I couldn't just leave it in the original 3-tone sound, so they have been built up into full-scale tracks. I ahve made sure that the original atmosphere has been retained and each can be listened to as separate music pieces, so that fans can enjoy."

Though specific release dates have not yet been provided for Final Fantasy IV, Final Fantasy V and Final Fantasy VI, there is a bundle available that offers all six games, along with OSTs featuring a few songs from each game and wallpapers. Presently, you can purchase the bundle at a 22% savings, for a price of $74.82 USD. Individually, the games are regularly priced from $11.99 USD for each of the first two games, to $17.99 USD for each of the remaining four, with a total cost of $95.94 USD.

You may also recall that Final Fantasy III-VI are available already on Steam in various forms. The official Final Fantasy Pixel Remasters site offers some guidance on how those older titles will be impacted by the new releases.

Final Fantasy V and Final Fantasy VI will be "taken off sale," which seems to mean they will be removed from the storefront. "Customers who have already purchased these titles will still be able to play or re-download them," notes the site, "but please be aware that there may be situations where we are unable to guarantee correct function if the environment they are used on changes." Also, "Old Ver." will be appended to their titles so you can tell them apart in your Steam library.

While the games are apparently only headed to PC and mobile devices for now, here's hoping Switch versions are on their way, as the series started out on Nintendo hardware. With Square Enix looking back fondly at some of its most important early titles and making them available to wide audiences, it would also be nice to see the company bring the games once again to relevant Sony platforms and expand their availability to Xbox gamers. Only time will tell whether that actually happens.

If you enjoyed this Final Fantasy article, you're encouraged to discuss it with the author and with other members of the site's community. If you don't already have an HonestGamers account, you can sign up for one in a snap. Thank you for reading!

© 1998 - 2022 HonestGamers
None of the material contained within this site may be reproduced in any conceivable fashion without permission from the author(s) of said material. This site is not sponsored or endorsed by Nintendo, Sega, Sony, Microsoft, or any other such party. Final Fantasy is a registered trademark of its copyright holder. This site makes no claim to Final Fantasy, its characters, screenshots, artwork, music, or any intellectual property contained within. Opinions expressed on this site do not necessarily represent the opinion of site staff or sponsors. Staff and freelance reviews are typically written based on time spent with a retail review copy or review key for the game that is provided by its publisher.