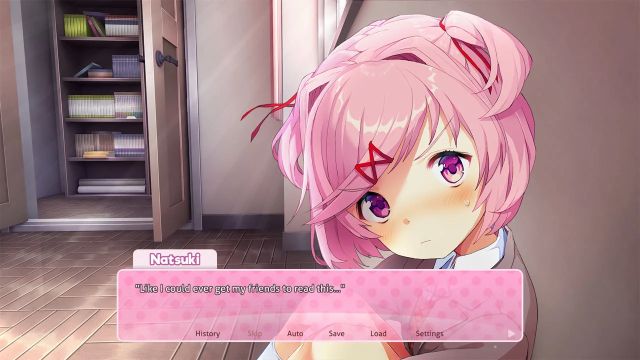 Come for the cute anime aesthetic, and stay for the creeping sense of of existential dread.

Not every game is as it seems, and visual novel Doki Doki Literature Club Plus! on Switch, PlayStation 4, PlayStation 5, Xbox One, Xbox Series X and PC is ready to prove it. Despite a sugary sweet exterior, complete with an anime art style and seemingly innocent subject matter, a dark core lurks at the center of this seemingly lovely apple.

Available starting today, the game's "Plus" version expands on the original PC release (which was a free download) to offer HD visuals, new side stories and music, and in general a "ton of new content" to explore.

In Doki Doki Literature Club Plus! you will assume the role of a young man who joins the school literature club after prompting from his good childhood friend, Sayori. There he meets Natsuki, Yuri and Monika, and they all set about writing poems as they get to know each other better and maybe even feel the faint tingle of romance.

There's obviously more to it, as some have described it as "one of the most disturbing games in a generation." It may seem like just another cutesy visual novel with bubblegum tones, but the ultimate goal is the sort of psychological horror that only truly subverted expectations can bring.

"DDLC Plus is bursting at the seams with hours of Side Stories that expand the world of Doki Doki Literature club, exploring themes and ideas that will give players a deeper understanding and sense of connection to each and every character and their individual relationships with one another," promises a press release issued earlier today by publisher Serenity Forge.

You can find out more about the game at the official Doki Doki Literature Club Plus site, or you can just buy it for $14.99 USD at one of the relevant storefronts and go in knowing very little. It's your choice, and there's very little pressure because it's not like anyone will die if you choose poorly. Probably.

If you enjoyed this Doki Doki Literature Club Plus! article, you're encouraged to discuss it with the author and with other members of the site's community. If you don't already have an HonestGamers account, you can sign up for one in a snap. Thank you for reading!

© 1998 - 2022 HonestGamers
None of the material contained within this site may be reproduced in any conceivable fashion without permission from the author(s) of said material. This site is not sponsored or endorsed by Nintendo, Sega, Sony, Microsoft, or any other such party. Doki Doki Literature Club Plus! is a registered trademark of its copyright holder. This site makes no claim to Doki Doki Literature Club Plus!, its characters, screenshots, artwork, music, or any intellectual property contained within. Opinions expressed on this site do not necessarily represent the opinion of site staff or sponsors. Staff and freelance reviews are typically written based on time spent with a retail review copy or review key for the game that is provided by its publisher.