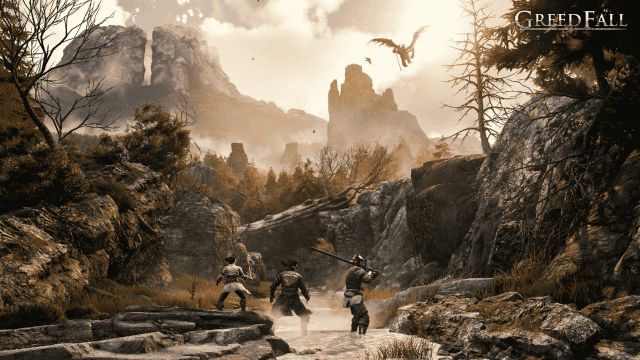 The new edition includes expanded content available for separate purchase if you already own the base game.

"Engage in a core roleplaying experience, and forge the destiny of a new world seeping with magic, and filled with riches, lost secrets, and fantastic creatures," suggests an official description of the game. "With diplomacy, deception and force, become part of a living, evolving world - influence its course and shape your story."

That all sounds lovely, and you can the standard edition on both PlayStation 4 and PlayStation 5 for $34.99 USD. However, the Gold Edition is available at $39.99 USD, a mere $5 more, and that sounds better still. Humorously, the game's page on the PlayStation Store also lists a $49.99 edition that only will run on the PlayStation 4, which seems like an oversight that might get addressed soon.

So, what do you get with the De Vespe Conspiracy expansion? Today's press release promises "new enemies and gear with a twisting narrative that expands GreedFall's acclaimed world and story." That sounds just lovely.

Players will explore the previously unavailable region of Teer Fradee and confront a new conspiracy threatening the balance of power. Look forward to all of the standard RPG highlights: a web of lies, manipulation and secrets, strange new beasts... and a villainous faction.

If you already own GreedFall, you can migrate your save to the next-gen version and enjoy resolution up to 4K and 60FPS, along with faster loading times, depending on whether or not you choose "performance" mode as you play. In any event, it sounds like the best version of GreedFall yet has finally arrived on relevant platforms, and we all know it would be a shame to miss out on that...

If you enjoyed this Greedfall article, you're encouraged to discuss it with the author and with other members of the site's community. If you don't already have an HonestGamers account, you can sign up for one in a snap. Thank you for reading!

© 1998 - 2022 HonestGamers
None of the material contained within this site may be reproduced in any conceivable fashion without permission from the author(s) of said material. This site is not sponsored or endorsed by Nintendo, Sega, Sony, Microsoft, or any other such party. Greedfall is a registered trademark of its copyright holder. This site makes no claim to Greedfall, its characters, screenshots, artwork, music, or any intellectual property contained within. Opinions expressed on this site do not necessarily represent the opinion of site staff or sponsors. Staff and freelance reviews are typically written based on time spent with a retail review copy or review key for the game that is provided by its publisher.