Curved Space comes to most consoles and PC 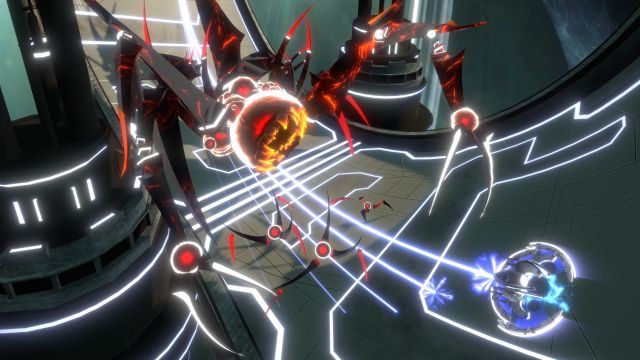 You can't play it on Switch just yet, but that will be possible starting in another two weeks.

Maximum Games has made its newest title, a "rapid-fire schmup," available on most platforms as of today. The game is available for PlayStation 4, PlayStation 5, Xbox One, Xbox Series X and PC right now, with a Switch version due to follow on July 13.

Developed by indie outfit Only By Midnight, Curved Space is "an intense arcade-style twin-stick shooter that takes the classic formula and plunges it into the weirdest reaches of space." In this particular case, "weirdest" means spiders, along with quite rigid gravity that causes projectile shots to hug the terrain rather than simply flying into the wild blue--er, black--yonder.

"Inspired by arcade classics, players will have to hunt for weapon power-ups and upgrades while dodging enemy fire, blasting interdimensional bugs, and wrangling some enormous boss monsters," reads today's press release. "Simple to learn as you fight your way through the branching story-driven campaign, but tough to master as you chase the glory of the leaderboards."

Only By Midnight is owned by a husband and wife, Andrew Czarnietzki and Jen Laface. Czarnietzki serves as Designer, Programmer, and Artist, with 15 years of experience in the industry, while Jen Laface comes from a strong background in storytelling, having worked as Publisher's Assistant at respected sci-fi and fantasy magazine, On-Spec.

Curved Space is available to purchase today, with an MSRP of $19.99 USD. You can find out more about the game at the official Curved Space site, if you're so inclined.

If you enjoyed this Curved Space article, you're encouraged to discuss it with the author and with other members of the site's community. If you don't already have an HonestGamers account, you can sign up for one in a snap. Thank you for reading!

© 1998 - 2022 HonestGamers
None of the material contained within this site may be reproduced in any conceivable fashion without permission from the author(s) of said material. This site is not sponsored or endorsed by Nintendo, Sega, Sony, Microsoft, or any other such party. Curved Space is a registered trademark of its copyright holder. This site makes no claim to Curved Space, its characters, screenshots, artwork, music, or any intellectual property contained within. Opinions expressed on this site do not necessarily represent the opinion of site staff or sponsors. Staff and freelance reviews are typically written based on time spent with a retail review copy or review key for the game that is provided by its publisher.