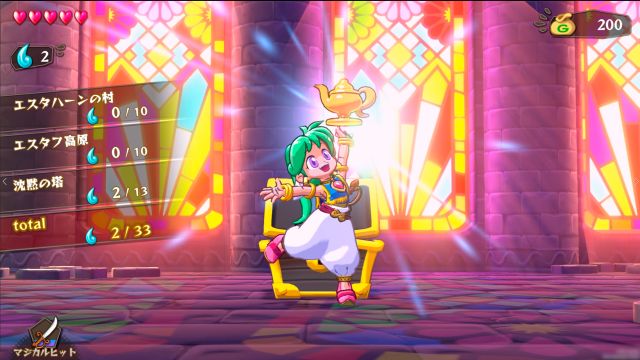 You say you want to save the world from evil invaders? That's the spirit! Now, just find three more...

Already released on Switch and PlayStation 4 last month, Wonder Boy: Asha in Monster World arrives next on Steam, its publisher announced today. Players worldwide will finally be able to enjoy the reworked platformer/RPG even if they don't have a spiffy console.

Developed by ArtDink, the console version of Wonder Boy: Asha in Monster World was published in the west by ININ Games and Strictly Limited Games. However, ArtDink is publishing the PC version as the second release under its new label, G Choice.

Originally, Wonder Boy: Asha in Monster World was published for the Mega Drive/Genesis. It was developed by Westumbit Entertainment Co., Ltd. and served as the final installment in the once-popular Wonder Boy series from Sega.

The game introduces Asha, a newly-minted warrior who must fight off invaders who have captured four spirits. Alongside Peperogu, a mysterious creature from the city of Rapadana, Asha will overcome "various difficulties" and hopefully save her world from destruction.

Wonder Boy: Asha in Monster World features RPG elements, as Asha can collect gold coins and use them to purchase gear such as swords and shields, to say nothing of... bangles. Everybody can use some bangles.

The game's Steam page won't let you place a preorder at present, but it does warn potential consumers that they will need a controller to play; keyboard/mouse support is not provided. Which is probably fine, given that the game is a platformer and those are usually best served by a friendly d-pad, but now you know.

If you enjoyed this Wonder Boy: Asha in Monster World article, you're encouraged to discuss it with the author and with other members of the site's community. If you don't already have an HonestGamers account, you can sign up for one in a snap. Thank you for reading!

© 1998 - 2022 HonestGamers
None of the material contained within this site may be reproduced in any conceivable fashion without permission from the author(s) of said material. This site is not sponsored or endorsed by Nintendo, Sega, Sony, Microsoft, or any other such party. Wonder Boy: Asha in Monster World is a registered trademark of its copyright holder. This site makes no claim to Wonder Boy: Asha in Monster World, its characters, screenshots, artwork, music, or any intellectual property contained within. Opinions expressed on this site do not necessarily represent the opinion of site staff or sponsors. Staff and freelance reviews are typically written based on time spent with a retail review copy or review key for the game that is provided by its publisher.