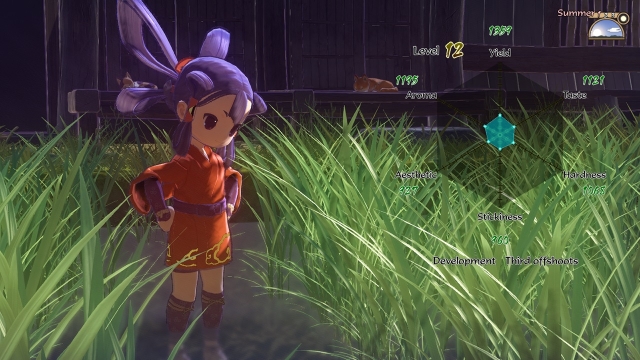 What celebration could be complete without new features, supported languages and more? None. So that stuff is coming.

First released on Switch and PlayStation 4 in November of last year, the game is the most successful yet for developer Edelweiss, which you may recognize for its work on a shooter called Astebreed. So the team clearly wanted to spread its wings and try something a little different, with exciting results.

Here at HonestGamers, in a reader review for the game's Switch version, mariner noted that the game can at times be purposefully tedious where the agricultural side is concerned, but that said tedium doesn't prevent the overall experience from being both unique and wonderful.

Sakuna: Of Rice and Ruin is also now available on the Epic Games Store. To celebrate the expanded availability, which will in theory lead to many more sales on top of those that already exist, the game is presently on sale with a 30% discount on the Epic Games Store, Nintendo eShop, Steam and PlayStation Store services.

Edelweiss also has added a new feature: the ability to hold a dog and a cat at the same time. Your dog will also greet you upon your return from adventuring, and there have been "myriad balancing adjustments and other improvements" along the way.

"We're thrilled that so many people have experienced Princess Sakuna's many adventures, from the relationships she forms with her human and animal companions to the unique charms of traditional Japanese rise cultivation," said Kenji Hosoi, a rise enthusiast who also happens to work at XSEED Games as the company's Executive Vice President. "We hope adding support for more languages and new storefronts, as well as fun additions from Edelweiss such as new ways of interacting with your pets, will entice more players around the world to experience her journey and learn about the power of rice."

Rice. It does good things.

Sakuna: Of Rice and Ruin is now available on the various services already mentioned above, in both standard and deluxe digital editions. You can also acquire a "Divine Edition" that lets physical collectors get something a little special for PlayStation 4 or Switch, provided your local retail establishment is feeling cooperative.

If you enjoyed this Sakuna: Of Rice and Ruin article, you're encouraged to discuss it with the author and with other members of the site's community. If you don't already have an HonestGamers account, you can sign up for one in a snap. Thank you for reading!

© 1998-2021 HonestGamers
None of the material contained within this site may be reproduced in any conceivable fashion without permission from the author(s) of said material. This site is not sponsored or endorsed by Nintendo, Sega, Sony, Microsoft, or any other such party. Sakuna: Of Rice and Ruin is a registered trademark of its copyright holder. This site makes no claim to Sakuna: Of Rice and Ruin, its characters, screenshots, artwork, music, or any intellectual property contained within. Opinions expressed on this site do not necessarily represent the opinion of site staff or sponsors. Staff and freelance reviews are typically written based on time spent with a retail review copy or review key for the game that is provided by its publisher.