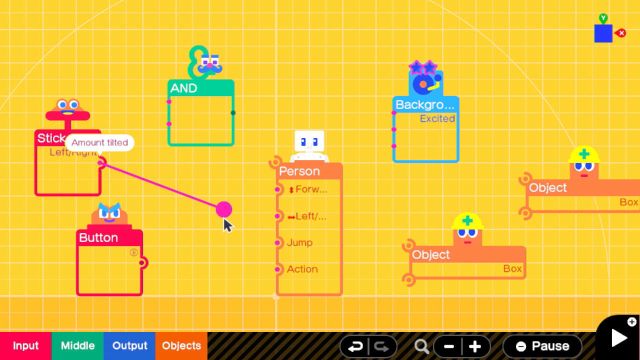 Published by Nintendo itself, the new software even lets you make use of a mouse, if that's your thing.

Nintendo of America today issued a press release to introduce Game Builder Garage, a piece of software for Nintendo Switch designed to let players build their own video games. The game will be available starting June 11.

Nintendo anticipates that "kids and parents and everyone in between can have fun learning to create and share their very own video games," which they will develop with assistance from guided lessons that cover the basics of visual game programming. You won't need any prior experience to get started, and creatures called "Nodon" will walk you through the many basics.

Apparently, you can connect Nodon creatures to put various concepts together and start them working, making it easier to test your ideas without doing all the work by hand.

"For anyone who has always wanted to make their own video games, Game Builder Garage is the perfect place to start," said Nintendo of America's Senior Vice President of Sales and Marketing, Nick Chavez. "Through the use of guided lessons and memorable Nodon characters, Game Builder Garage helps make creating video games just as much fun as playing them!"

Players will likely start their experience with Lesson mode, which introduces the Nodon and visual programming concepts. Checkpoints along the way allow players to test the knowledge they have gleaned before proceeding, with puzzles and tasks to make the process more enjoyable.

Free Programming mode allows players to swap between programming and testing out what they have built with the press of a button. It will also be possible to share games with friends using codes, then view the source materials and work on them collaboratively if desired.

Finally, Nintendo notes that the software can be operated with a standard Joy-Con controller or the Pro Controller, or with the Nintendo Switch Lite controls, but it's also possible to use a compatible mouse by plugging it into the USB port on the Nintendo Switch dock. "This control option might be easier for people who love the feel of a mouse when navigating the software," speculates Nintendo.

Game Builder Garage is only a little more than a month away, and will carry an MSRP of $29.99, which could make it a tempting purchase for those who enjoyed Super Mario Maker and might be ready to take things even further. Can you picture yourself building games on the Nintnedo Switch?

If you enjoyed this Game Builder Garage article, you're encouraged to discuss it with the author and with other members of the site's community. If you don't already have an HonestGamers account, you can sign up for one in a snap. Thank you for reading!

© 1998-2021 HonestGamers
None of the material contained within this site may be reproduced in any conceivable fashion without permission from the author(s) of said material. This site is not sponsored or endorsed by Nintendo, Sega, Sony, Microsoft, or any other such party. Game Builder Garage is a registered trademark of its copyright holder. This site makes no claim to Game Builder Garage, its characters, screenshots, artwork, music, or any intellectual property contained within. Opinions expressed on this site do not necessarily represent the opinion of site staff or sponsors. Staff and freelance reviews are typically written based on time spent with a retail review copy or review key for the game that is provided by its publisher.