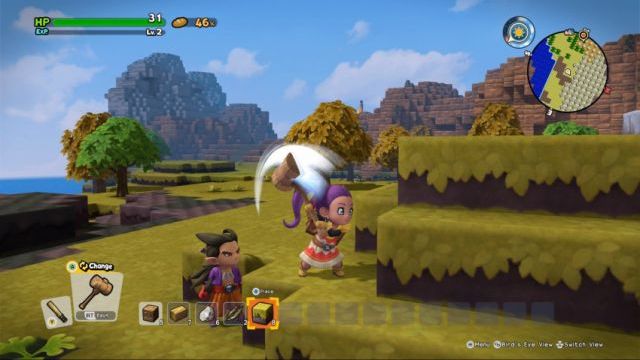 You can buy the game or start enjoying it on Game Pass today!

The wait is over, assuming the wait we're talking about is the wait for Dragon Quest Builders 2's arrival on Xbox One. Which of course we are.

As a nifty bonus, buying Dragon Quest Builders 2 on either Xbox One or Windows 10 PC will allow you to play it on the other platform, giving you twice the dragon-related questing for one price. Your save progress and any Achievements will also be shared.

"Xbox players can embark on an adventure on their own or can team up online with up to three friends as they take on the role of a young builder who washes up on the Isle of Awakening alongside Malroth, a mysterious youth suffering from amnesia," notes today's press release issued to mark the grand occasion. "Together, they explore different islands while developing skills to become a 'Master Builder' by helping townsfolk, crafting materials, working together with villagers to harvest different crops and fight off enemies."

The Dragon Quest Builders games in some ways resemble a cross between the classic Dragon Quest games you know and love, and fresher sandbox games such as Microsoft's own Minecraft. Square Enix reckons the new release is the perfect way to enter the Dragon Quest universe, even if you lack years of history with the classic franchise, and who are we to argue with the game's own publisher?

If you enjoyed this Dragon Quest Builders 2 article, you're encouraged to discuss it with the author and with other members of the site's community. If you don't already have an HonestGamers account, you can sign up for one in a snap. Thank you for reading!

© 1998-2021 HonestGamers
None of the material contained within this site may be reproduced in any conceivable fashion without permission from the author(s) of said material. This site is not sponsored or endorsed by Nintendo, Sega, Sony, Microsoft, or any other such party. Dragon Quest Builders 2 is a registered trademark of its copyright holder. This site makes no claim to Dragon Quest Builders 2, its characters, screenshots, artwork, music, or any intellectual property contained within. Opinions expressed on this site do not necessarily represent the opinion of site staff or sponsors. Staff and freelance reviews are typically written based on time spent with a retail review copy or review key for the game that is provided by its publisher.