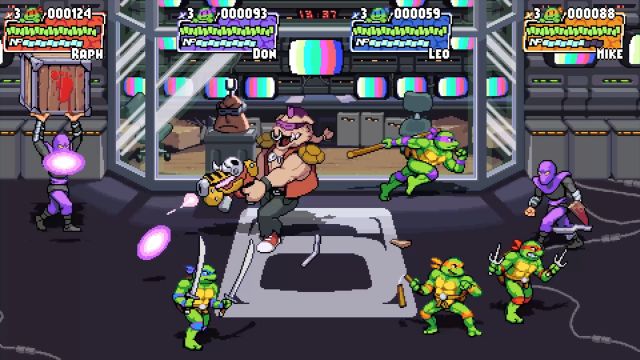 The throwback brawler from Tribute Games and DotEmu is confirmed for Nintendo's console. YES!

The famous turtles have appeared in a number of games over the years, including a beloved arcade game that has inspired most efforts to follow it. That game, a four-player brawler, appears--along with Teenage Mutant Ninja Turtles IV: Turtles in Time--to provide the primary inspiration for the newer effort, which also is a four-player brawler.

Visuals are only part of the package, and the game will benefit from original music from composer Tee Lopes, best known for previous work on the likes of Sonic Mania, Monster Boy and the Cursed Kingdom and even League of Legends.

Confirmed to appear in the game are of course the four turtles themselves (the artistically inclined Michelangelo, Raphael, Leonardo and Donatello), along with familiar villains such as Bebop and Rocksteady. Their battles will take them through a variety of locations, including Dimension X.

Tribute Games has ample experience developing retro-style games, thanks to its work on original properties such as Panzer Paladin, Flinthook and Mercenary Kings. The diminutive studio also houses key talent behind Scott Pilgrim vs. The World: The Game, a well regarded brawler most famous for becoming unavailable for several years until fan demand prompted its recent return.

DotEmu is a publisher and developer known for Streets of Rage 4 and Wonder Boy: The Dragon's Trap, and is also hard at work on Windjammers 2.

Numerous studios, including Konami itself, have attempted to recapture the magic of the classic Teenage Mutant Ninja Turtles arcade games, but those efforts have for the most part fallen short by anywhere from a little to a lot. Like... a lot. So here's hoping the capable folks involved in this latest revival attempt will find all the success one can hope for as they bring back TURTLE POWER!

If you enjoyed this Teenage Mutant Ninja Turtles: Shredder's Revenge article, you're encouraged to discuss it with the author and with other members of the site's community. If you don't already have an HonestGamers account, you can sign up for one in a snap. Thank you for reading!

© 1998-2021 HonestGamers
None of the material contained within this site may be reproduced in any conceivable fashion without permission from the author(s) of said material. This site is not sponsored or endorsed by Nintendo, Sega, Sony, Microsoft, or any other such party. Teenage Mutant Ninja Turtles: Shredder's Revenge is a registered trademark of its copyright holder. This site makes no claim to Teenage Mutant Ninja Turtles: Shredder's Revenge, its characters, screenshots, artwork, music, or any intellectual property contained within. Opinions expressed on this site do not necessarily represent the opinion of site staff or sponsors. Staff and freelance reviews are typically written based on time spent with a retail review copy or review key for the game that is provided by its publisher.