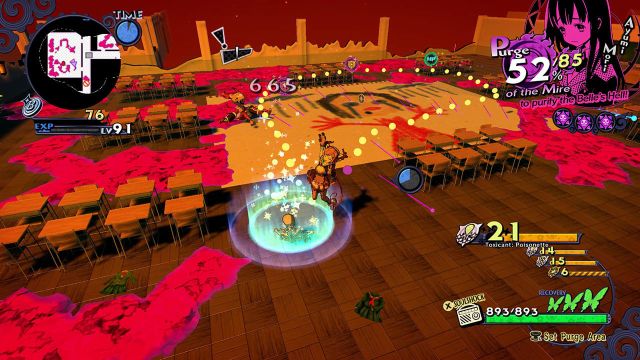 If nothing else, the development team's name game is on point. Check out some of the clever wordplay!

The wait is over and you can enjoy Poison Control starting today, publisher NIS America announced today. The game, developed by Nippon Ichi Software in Japan, is available for both PlayStation 4 and Nintendo Switch and offers action and exploration aplenty.

Poison Control players use the powers of the haughty poison maiden, Poinsonette, to save spirits that have become trapped within poisonous manifestations of their personal despair. Throughout the region of Belles' Hells, the maiden and her amnesiac companion will have all sorts of adventures as they cross paths with other maidens and also the twisted creatures that inhabit the venomous realm.

Nippon Ichi Software most famously develops RPGs and strategy games such as those in the Disgaea series, but has ventured into more action-oriented territory on occasion with the previous likes of The Witch and the Hundred Knight, as well as the Prinny games. Not every experiment is a success. Do you suppose this game will be one of the team's triumphs?

If you enjoyed this Poison Control article, you're encouraged to discuss it with the author and with other members of the site's community. If you don't already have an HonestGamers account, you can sign up for one in a snap. Thank you for reading!

© 1998-2021 HonestGamers
None of the material contained within this site may be reproduced in any conceivable fashion without permission from the author(s) of said material. This site is not sponsored or endorsed by Nintendo, Sega, Sony, Microsoft, or any other such party. Poison Control is a registered trademark of its copyright holder. This site makes no claim to Poison Control, its characters, screenshots, artwork, music, or any intellectual property contained within. Opinions expressed on this site do not necessarily represent the opinion of site staff or sponsors. Staff and freelance reviews are typically written based on time spent with a retail review copy or review key for the game that is provided by its publisher.