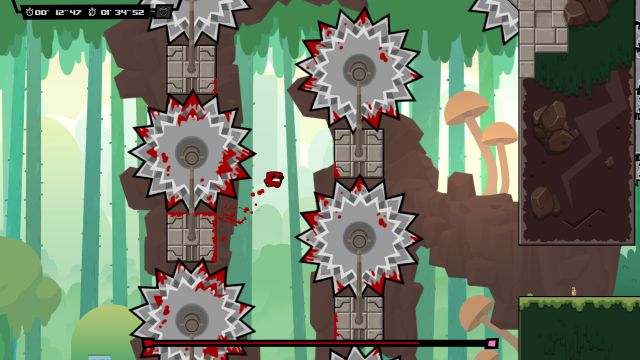 You can already play it on Nintendo Switch and PC, right this instant. But some people opted to wait.

Super Meat Boy Forever finally arrives on PlayStation 4 and 5, as well as Xbox One and Xbox Series X, in just a few short days. Its April 16, 2021 release will follow a debut on Nintendo Switch and the Epic Games Store this past December.

As Meat Boy and his partner Bandage Girl, players can pursue Dr. Fetus to rescue their child, Nugget, with whom the villain has absconded. Along the way, they'll meat with "surprising" new characters in the Meat Boy Cinematic Universe. Eat your heart out, Marvel!

Notably, Super Meat Boy Forever gifts its super tough hero with a powerful punch, along with the newfound ability to slide and even plummet. You've never seen a sentient meat patty with this much agility, even though Meat Boy already had--and frequently relied upon--his unlikely ability to wall jump in his original adventure.

Another hook the game offers is replayability. Each time you finish your run through the game, a new batch of levels are assembled at random, complete with new secret locations. There are thousands of total stages in the mix, so your samples seem destined to last just about forever.

"As great as it was for Super Meat Boy to make his return on Switch and the Epic Games Store, no return would be complete without a victory lap on PlayStation and Xbox platforms - which many of you may remember Meat Boy making his console premiere on over a decade ago," said Tommy Refenes, Team Meat co-founder. "Super Meat Boy Forever isn't just more of the same, though. This is Meat Boy evolved. He now has a completely different moveset, controls, power-ups, and endless level remixes that can be played forever!"

Super Meat Boy was originally developed as a free Flash game by Edmund McMillen and Jonathan McEntee. Its difficulty helped it go viral in 2008, and players haven't been able to get it off their minds since then, especially thanks to a more polished console version that arrived in 2010 on Xbox 360. Are you anxious to get back to the bloody business of introducing Meat Boy to buzzsaw blades again?

If you enjoyed this Super Meat Boy Forever article, you're encouraged to discuss it with the author and with other members of the site's community. If you don't already have an HonestGamers account, you can sign up for one in a snap. Thank you for reading!

© 1998-2021 HonestGamers
None of the material contained within this site may be reproduced in any conceivable fashion without permission from the author(s) of said material. This site is not sponsored or endorsed by Nintendo, Sega, Sony, Microsoft, or any other such party. Super Meat Boy Forever is a registered trademark of its copyright holder. This site makes no claim to Super Meat Boy Forever, its characters, screenshots, artwork, music, or any intellectual property contained within. Opinions expressed on this site do not necessarily represent the opinion of site staff or sponsors. Staff and freelance reviews are typically written based on time spent with a retail review copy or review key for the game that is provided by its publisher.