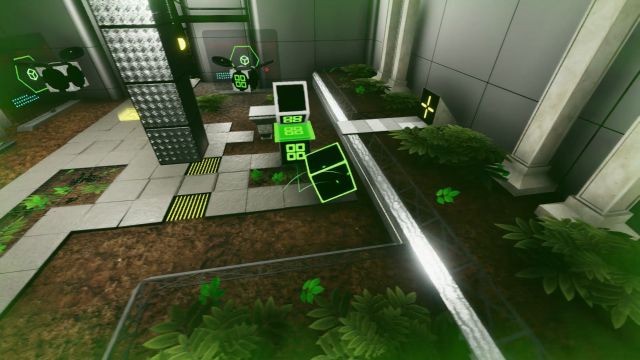 Marbles shouldn't get to have all the fun.

Hopefully, you don't have a purpose in mind for a lot of cubes later this year, because it sounds like the last of them will be getting its own game. Appropriately entitled The Last Cube, the game is planned for release on PC, Nintendo Switch, Xbox and PlayStation, where those last two labels could theoretically amount to any combination of two to four systems.

Developed by Improx Games, The Last Cube is "a richly atmospheric puzzle game about guiding a cube through a plethora of moody, monolithic chambers as you uncover the story behind this peculiar world."

If you're looking forward to uplifting and emotionally renewing environments, maybe don't; the press release promises "brutalist" architecture, nightmarish abysses, fog and "oppressive" factories. There is also mention of "natural landscapes full of golden rays of sunshine glistening against mountains," but that does seem at odd with the "dying world on the cusp of ruin" that seems to be the recurring theme.

Moving beyond mood, the game introduces a "sticker" upgrade you can attach to the side of the cube, which allows you to dash through barriers, produce stairs, teleport and so forth. There are apparently numerous stickers to imbue your cube with the desired capabilities as you work to solve more than 100 puzzles in all. Today's press release also references a "bevy of collectibles and bonus stages" available for the hearty explorer, which sounds lovely.

"We've identified the audience who loves atmospheric puzzle games with lightweight narrative - we ourselves love those games," said Max Samarin of Improx Games. "The Last Cube is an experience that delivers exactly that, while the unique mechanics also bring a whole novel aspect to it. You might have played certain cube games as a kid, but not executed like this. And it's not just about the puzzles - it's also a cosmic adventure through a varied, alien world full of mystery and wonder that draws players from outside the puzzle genre as well."

If you want to find out more about the game ahead of its release, check out the demo, currently available from The Last Cube page on Steam. It could give you your first glimpse of a game that combines impending doom with sun-kissed mountains.

If you enjoyed this The Last Cube article, you're encouraged to discuss it with the author and with other members of the site's community. If you don't already have an HonestGamers account, you can sign up for one in a snap. Thank you for reading!

© 1998-2021 HonestGamers
None of the material contained within this site may be reproduced in any conceivable fashion without permission from the author(s) of said material. This site is not sponsored or endorsed by Nintendo, Sega, Sony, Microsoft, or any other such party. The Last Cube is a registered trademark of its copyright holder. This site makes no claim to The Last Cube, its characters, screenshots, artwork, music, or any intellectual property contained within. Opinions expressed on this site do not necessarily represent the opinion of site staff or sponsors. Staff and freelance reviews are typically written based on time spent with a retail review copy or review key for the game that is provided by its publisher.