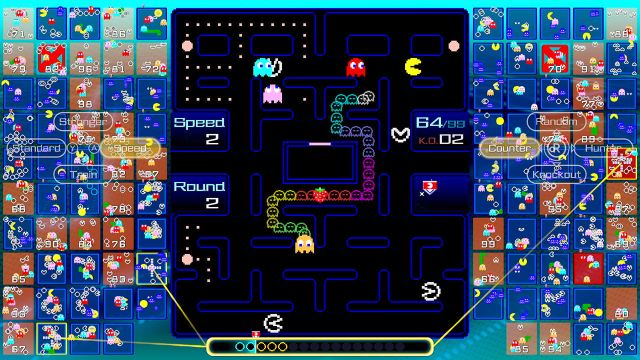 Ninety-nine will enter the arena, but only one can emerge as... Pac-One!

Bandai Namco today revealed Pac-Man 99, a battle royale game in the vein of Tetris 99 and Super Mario Bros. 35 that is available for free on Nintendo Switch. Optional paid content is also offered but not required.

Developed by Arika, Pac-Man 99 lets 99 Pac-Man players compete in the traditional arena... with a few twists. As players defeat ghosts on their own turf, outlines of those ghosts will appear in opponents' mazes to bedevil them. Additionally, ghost outlines appear along the sides of the maze and players can chomp them down to substantially increase their combo possibilities once they get around to scarfing down a Power Pellet and going after nearby ghosts.

As usual, it will be possible to select a general group of players your own actions impact, using an interface that seems to have been lifted directly out of Tetris 99.

"Pac-Man 99 delivers a frantic and fun multiplayer take on the storied Pac-Man gameplay," said Pearl Lai, Bandai Namco America's Brand Manager. "The quick pick-up-and-play strucutre of the game coupled with the play anywhere nature of Nintendo Switch makes it the perfect experience for anyone looking for a bit of good-natured competition Pac-Man has always been known for."

Though originally made popular as a single-player experience, Pac-Man has always included as one of its elements the pursuit of a high score you could rub in other players' faces. There also have been more recent installments in the Pac-Man Championship series, which revived and reimagined Pac-Man as a multiplayer-oriented affair.

Bandai Namco hopes players will enjoy Pac-Man 99 enough that they turn a free experience into a paid one. The company is offering character skins based on other Bandai Namco properties for $1.99 apiece, along with "private matches" and time-attack challenges and so forth that will be available as part of a $29.99 bundle.

Mario may have been unceremoniously yanked from Nintendo Switch Online as Nintendo marked the end of its 35-year celebration of the famous plumber, but free games are a good look. The opportunity to rock out in mazes and send ghosts after your enemies sounds like it could easily find an excited audience in the weeks and months to come. Do you plan to be part of that audience?

If you enjoyed this Pac-Man 99 article, you're encouraged to discuss it with the author and with other members of the site's community. If you don't already have an HonestGamers account, you can sign up for one in a snap. Thank you for reading!

© 1998-2021 HonestGamers
None of the material contained within this site may be reproduced in any conceivable fashion without permission from the author(s) of said material. This site is not sponsored or endorsed by Nintendo, Sega, Sony, Microsoft, or any other such party. Pac-Man 99 is a registered trademark of its copyright holder. This site makes no claim to Pac-Man 99, its characters, screenshots, artwork, music, or any intellectual property contained within. Opinions expressed on this site do not necessarily represent the opinion of site staff or sponsors. Staff and freelance reviews are typically written based on time spent with a retail review copy or review key for the game that is provided by its publisher.