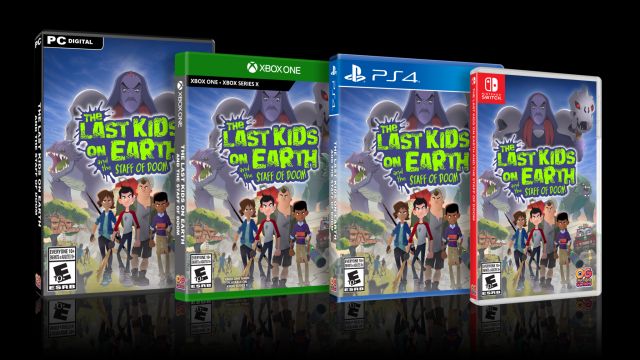 And no, that's not a report on what the folks who worked on DOOM Eternal are up to these days. We checked.

The Last Kids on Earth and the Staff of Doom, a family-friendly action game from Stage Clear Studios and publisher Outright Games, is due to arrive on Nintendo Switch, PlayStation 4, Xbox One and PC on June 4, 2021, a press released revealed today. The game is based on The Last Kids on Earth, an Emmy-winning Netflix series.

Fans of the series will find an all-new story, set in the town of Wakefield as seen in the middle of an apparent zombie invasion. Players control Jack, Quint, June and Dirk as they seek out the Staff of Doom and face off against Malondre, the Queen of Slime Monsters, who apparently is bent on summoning Rezzoch, the Ancient Destructor of Worlds. That's the sort of thing the kids are into these days.

One thing worth mentioning: the game will allow as many as four players to join together on the quest in offline co-op mode, which is not super common these days but which should please the many parents who routinely head into Walmart looking for loads of co-op games for their young children to play on Xbox or PlayStation that aren't LEGO games.

"We are delighted to reveal more details about this exciting original story that serves as the backdrop for our interactive addition to the amazing universe, of The Last Kids on Earth," said Terry Malham, CEO of Outright Games and apparent abuser of commas. "Our partnership with Cyber Group Studios has allowed Outright Games to work on some of the most exciting kids' entertainment franchises in the world today. The Last Kids on Earth has proven to be a perfect fit to adapt into a video game, and along with our partners at Cyber Group, Clear State and Atomic Cartoons, we're confident that fans and newcomers alike will fall in love with what we've got in store for them."

The Netflix show is based on books from author Max Brallier, and seems to be exploring a variety of mediums, including a graphic novel published just yesterday that includes six short stories with art from a variety of artists.

"We started with books, then went interactive on Netflix, and now fans of the Last Kids on Earth have the power in their hands to fully control the fates of Jack, Quint, June and Dirk as they take on the greatest foes ever faced in their battle to save the world," observed Max Brallier. "The world of The Last Kids on Earth just keeps on growing, and I can't wait to see how readers, viewers and gamers around the world respond to the next exciting chapter in the journey of these beloved characters."

The animated series apparently features vocal work from a number of familiar faces, including Mark Hamill, Rosario Dawson, Catherine O'Hara, Keith David, Bruce Campbell and others. Of course, none of that means the game will be any good at all, but we'll take it as an encouraging sign there is at least potential...

If you enjoyed this The Last Kids on Earth and the Staff of Doom article, you're encouraged to discuss it with the author and with other members of the site's community. If you don't already have an HonestGamers account, you can sign up for one in a snap. Thank you for reading!

© 1998-2021 HonestGamers
None of the material contained within this site may be reproduced in any conceivable fashion without permission from the author(s) of said material. This site is not sponsored or endorsed by Nintendo, Sega, Sony, Microsoft, or any other such party. The Last Kids on Earth and the Staff of Doom is a registered trademark of its copyright holder. This site makes no claim to The Last Kids on Earth and the Staff of Doom, its characters, screenshots, artwork, music, or any intellectual property contained within. Opinions expressed on this site do not necessarily represent the opinion of site staff or sponsors. Staff and freelance reviews are typically written based on time spent with a retail review copy or review key for the game that is provided by its publisher.