TASOMACHI: Behind The Twilight brings East Asian adventure to Steam next week 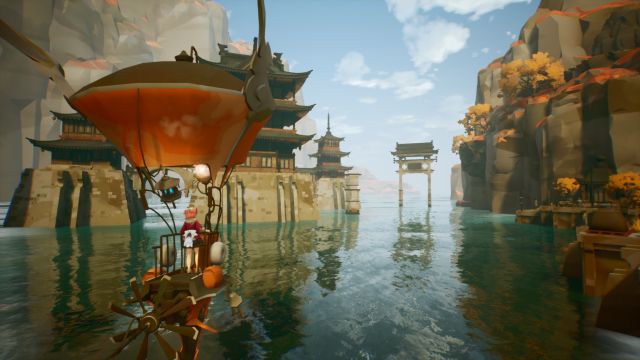 The environment artist responsible has worked on Final Fantasy XIV: A Realm Reborn and Breath of the Wild.

TASOMACHI: Behind The Twilight will arrive on Steam on April 14, 2021, publisher Playism has announced. The game is a 3D exploration platformer modeled after key titles from the genre's 90s heyday.

Developed by nocras and Orbital Express, TASOMACHI: Behind The Twilight introduces Yukumo, a young girl who travels the world aboard an airship. She arrives in a Far Eastern town with errands in mind, but her ship breaks down and that leaves her to explore in search of parts. Unfortunately, the town seems to have mysteriously been abandoned to a strange species of cat-like individuals.

As Yukumo explores, she will gradually make repairs to her ship that allow her to explore more of the mysterious world around her, including piers, valleys and lakes. Clearly, she at some point becomes invested in the mystery she has unearthed, and so it will fall to players to dig ever deeper and have pleasing adventures along the way.

TASOMACHI: Behind The Twilight was created by an environmental artist who contributed to both Final Fantasy XIV: A Realm Reborn and The Legend of Zelda: Breath of the Wild, which seems evident from some of the game's beautiful environments. The biggest question now is how it all fits together and plays, and you don't have to wait long before you'll be able to find that much out for yourself...

If you enjoyed this TASOMACHI: Behind The Twilight article, you're encouraged to discuss it with the author and with other members of the site's community. If you don't already have an HonestGamers account, you can sign up for one in a snap. Thank you for reading!

© 1998-2021 HonestGamers
None of the material contained within this site may be reproduced in any conceivable fashion without permission from the author(s) of said material. This site is not sponsored or endorsed by Nintendo, Sega, Sony, Microsoft, or any other such party. TASOMACHI: Behind The Twilight is a registered trademark of its copyright holder. This site makes no claim to TASOMACHI: Behind The Twilight, its characters, screenshots, artwork, music, or any intellectual property contained within. Opinions expressed on this site do not necessarily represent the opinion of site staff or sponsors. Staff and freelance reviews are typically written based on time spent with a retail review copy or review key for the game that is provided by its publisher.