Buildings Have Feelings Too! finally reaches consoles and PC this month 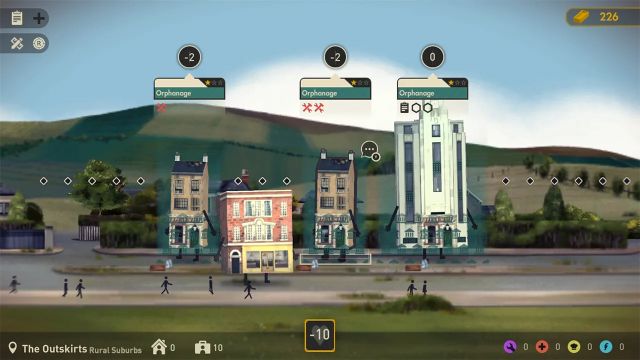 Originally scheduled to debut in 2018, Buildings Have Feelings Too! wasn't really feeling it and now arrives this month.

Merge Games and Blackstaff Games announced earlier today that Buildings Have Feelings Too! is due to arrive on Nintendo Switch, PlayStation 4, Xbox One and PC on April 22, 2021. The game dates back around three years, with an original 2018 announcement that implied--wrongly, it turns out--a release was imminent.

According to the press release, the delay is explained by the fact the team "took the time to build the game right," which is always ideal even if it means unfortunate delays on occasion. Now players can finally learn what they've been living without.

Buildings Have Feelings Too! tasks players with turning regular city streets into a metropolitan center. Building is apparently only part of the job, however, as the buildings have "feelings" and they risk being demolished if today's "new and shiny" becomes tomorrow's "old and unlively."

"Imagine a city where buildings can walk and talk to one another," says the sort of press release that could hardly represent anything but a video game. "Each one has its own aspirations, hope and fears. Most of the time they're just trying to get along with each other and make it through the day."

Time marches ever onward, which means new industries and architectural marvels. Adaptation is key, and also relocation. When your buildings have legs, they need not always retain the same view for the entirety of their existence. There are new challenges and opportunities around each bend.

From the sound of things, Buildings Have Feelings Too! has a neat core concept, so let's hope the developers built on it to produce something enjoyable and suitably unique. You'll be able to check it out yourself on the appointed day, provided you have $19.99 / 19.99 / £14.99 to devote to the cause.

If you enjoyed this Buildings Have Feelings Too! article, you're encouraged to discuss it with the author and with other members of the site's community. If you don't already have an HonestGamers account, you can sign up for one in a snap. Thank you for reading!

© 1998-2021 HonestGamers
None of the material contained within this site may be reproduced in any conceivable fashion without permission from the author(s) of said material. This site is not sponsored or endorsed by Nintendo, Sega, Sony, Microsoft, or any other such party. Buildings Have Feelings Too! is a registered trademark of its copyright holder. This site makes no claim to Buildings Have Feelings Too!, its characters, screenshots, artwork, music, or any intellectual property contained within. Opinions expressed on this site do not necessarily represent the opinion of site staff or sponsors. Staff and freelance reviews are typically written based on time spent with a retail review copy or review key for the game that is provided by its publisher.