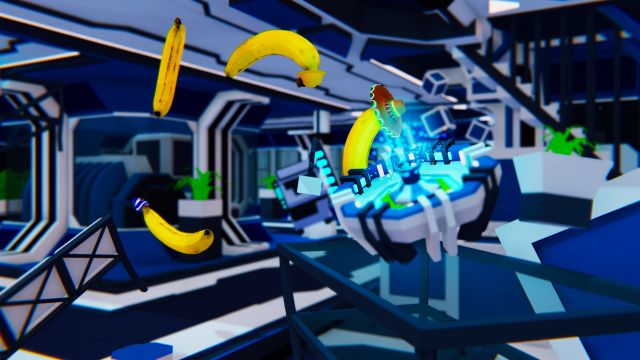 Who are you? Who are we? Who are any of us, if not bananas floating in space?

PQube, the international publisher known for its interesting selection of indie titles, chose April 1 as the day to unveil International Space Banana, a game it says is "probably coming to Steam at some point." We're about 60% sure this isn't all some elaborate April Fool's Day prank.

Developed by Cool Scooter Software, International Space Banana's claim to fame is that it perfectly captures the reality of bananas living in space, something few other games have attempted. Just check out this list of features from the press release:

The game stars an aerospace scientist who has been turned into a literal banana, albeit one with the ability to move about dangerous environments and encounter "painfully accurate physics simulations."

"All you really have to do is generate enough applied force to worm your way through a maze of literal junk," explains the press release. "Don't even worry about drag because you know, it's space, so that's one less mountain to climb, just get yourself to the control station. It really could not be simpler."

We didn't even add the bolded text at the end. That was included right in the press release.

So what do you think? Is this all some holiday ruse, designed to make fools of us all, or is International Space Banana well and truly on its way? A bit of research shows the game does seem to be available on Steam already for a mere $4.49 on sale, but so is a soundtrack priced at $199.99 and that doesn't seem quite right. It's all so very confusing!

If you enjoyed this International Space Banana article, you're encouraged to discuss it with the author and with other members of the site's community. If you don't already have an HonestGamers account, you can sign up for one in a snap. Thank you for reading!

© 1998-2021 HonestGamers
None of the material contained within this site may be reproduced in any conceivable fashion without permission from the author(s) of said material. This site is not sponsored or endorsed by Nintendo, Sega, Sony, Microsoft, or any other such party. International Space Banana is a registered trademark of its copyright holder. This site makes no claim to International Space Banana, its characters, screenshots, artwork, music, or any intellectual property contained within. Opinions expressed on this site do not necessarily represent the opinion of site staff or sponsors. Staff and freelance reviews are typically written based on time spent with a retail review copy or review key for the game that is provided by its publisher.