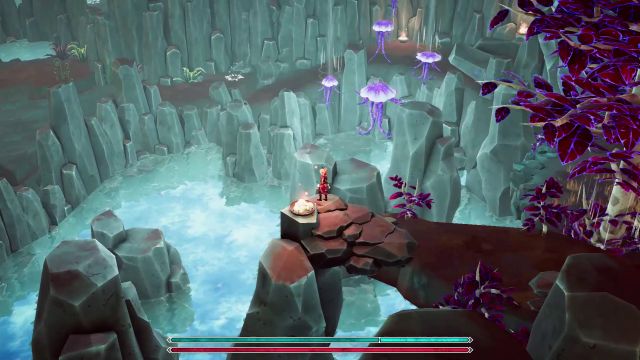 You can let your fingers do the talking and the combat and so forth starting today.

Fishing Cactus has put the finishing touches on Nanotale and you can buy it today on Steam, GOG and Google Stadia, the developer/publisher announced today in a press release. It's the spiritual successor to Epistory: Typing Chronicles, which released back in 2015.

Players control Rosalind, a novice Archivist, as she attempts to save her world using magic spells and a healthy sense of curiosity. The desire to stave off her world's demise will find her collecting nature samples, cataloguing mysterious coincidences and in general doing the sort of things that heroes do in more conventional fare.

"It's been a dream to develop the ultimate typing adventure and we've learned so much from Epistory and our time in Early Access," said Bruno Urbain, CEO of Fishing Cactus. "We want to share Nanotale with as many people as possible and can't wait for players to experience it!"

Whether you're interacting with characters, solving puzzles or unleashing your magical powers, you'll control it all with your keyboard. It's a great way to improve your typing skills, all with no Mavis Beacon in sight.

As a neat bonus, those players who purchase Nanotale on Steam during its first two weeks of availability will receive a free copy of Epistory, which is twice the fun of a certain type. Nanotale itself retails for £15.49/$19.99/19.99.

If you enjoyed this Nanotale: Typing Chronicles article, you're encouraged to discuss it with the author and with other members of the site's community. If you don't already have an HonestGamers account, you can sign up for one in a snap. Thank you for reading!

© 1998-2021 HonestGamers
None of the material contained within this site may be reproduced in any conceivable fashion without permission from the author(s) of said material. This site is not sponsored or endorsed by Nintendo, Sega, Sony, Microsoft, or any other such party. Nanotale: Typing Chronicles is a registered trademark of its copyright holder. This site makes no claim to Nanotale: Typing Chronicles, its characters, screenshots, artwork, music, or any intellectual property contained within. Opinions expressed on this site do not necessarily represent the opinion of site staff or sponsors. Staff and freelance reviews are typically written based on time spent with a retail review copy or review key for the game that is provided by its publisher.