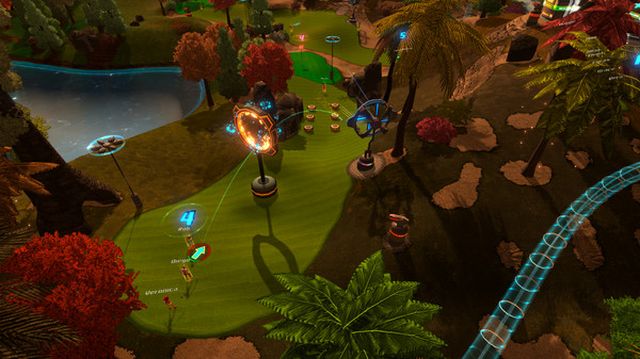 GolfTopia is available on Steam today, courtesy of MinMax Games, the developer and publisher announced today in a press release. The two-man team's previous projects include Space Pirates and Zombies 1 and 2.

In GolfTopia, which until today had been available in Early Access, players turn a small bit of land into a "mega-resort." They can stick to classic attractions, but where's the fun in that when you could just as easily plant a burning ring of fire? And, you know, other such things.

"GolfTopia aims to create a humorous management tycoon experience fused with wacky physics-based golf mechanics," reads a press release, adding shortly thereafter that, "Beauty is only turf deep; as every tree, every blade of rough, every bump and roll of the terrain changes how golf is played."

Of course, you want your visitors to be happy, so they'll return for subsequent outings. You also have to worry about managing foliage and pests, using robotic workers and defensive turrets. Yours will be the golf course that has it all!

Speaking of having it all, here's a list of official game features:

Surely you'll have a rough time thinking of other recent golf sims that pack so much in a single package. When's the last time a Tiger Woods or Mario Golf title let you set up defensive turrets?

GolfTopia costs $19.99 USD and is not offered with a launch week discount in place like has become so common in the industry, but that oversight probably won't make playing the game any less enjoyable unless you dwell on it excessively. And why would you do that?

If you enjoyed this GolfTopia article, you're encouraged to discuss it with the author and with other members of the site's community. If you don't already have an HonestGamers account, you can sign up for one in a snap. Thank you for reading!

© 1998-2021 HonestGamers
None of the material contained within this site may be reproduced in any conceivable fashion without permission from the author(s) of said material. This site is not sponsored or endorsed by Nintendo, Sega, Sony, Microsoft, or any other such party. GolfTopia is a registered trademark of its copyright holder. This site makes no claim to GolfTopia, its characters, screenshots, artwork, music, or any intellectual property contained within. Opinions expressed on this site do not necessarily represent the opinion of site staff or sponsors. Staff and freelance reviews are typically written based on time spent with a retail review copy or review key for the game that is provided by its publisher.