Eggcelerate! brings racing and fragile eggs to Steam just in time for the Easter holiday 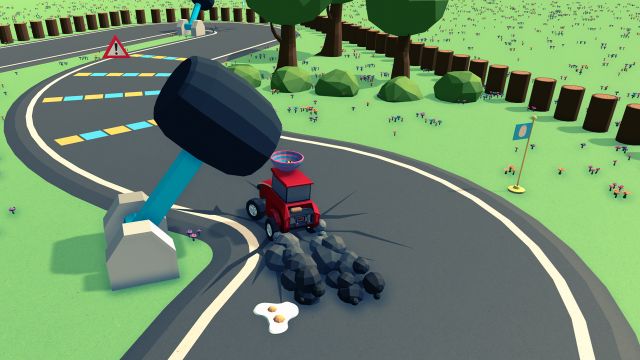 Race through dangerous courses and protect your precious egg in a basket, as one does.

Broken eggs are part of the Easter holiday period, but they don't have to be. In Eggcelerate!, available today on Steam, you'll put your precious egg in a basket and then (for some reason) put that basket on top of an all-terrain vehicle that you will then (for reasons that make increasingly less sense) drive at high speeds through a treacherous, hilly, winding obstacle course.

Yes, it sounds like the perfect Easter-themed video game, which exactly what it is. Eggcelerate! comes from Tim Beaudet, a one-man development team. He worked previously on the likes of Rock Band 3, Darkest of Days, and other stuff to boot.

"The idea for Eggcelerate! was conceptualized during LudumDare 46 and it proved very entertaining," notes today's press release trumpeting the game's arrival on Valve's digital storefront. "The 48-hour 8-hour prototype was ranked in the top 1% for fun (12th of 1383) which led to building the full version for Easter 2021."

Conceptualized? I would have said "hatched," myself.

Visually, the game looks fairly simple but still appealing, and the traps resemble something you might have expected to find in the old arcade classic, Marble Madness. The game is currently offered at a discounted $5.99 but that price will increase to $7.99 on my birthday because life's not fair. Make sure to grab it while you can take advantage of those egg-cellent savings!

If you enjoyed this Eggcelerate! article, you're encouraged to discuss it with the author and with other members of the site's community. If you don't already have an HonestGamers account, you can sign up for one in a snap. Thank you for reading!

© 1998-2021 HonestGamers
None of the material contained within this site may be reproduced in any conceivable fashion without permission from the author(s) of said material. This site is not sponsored or endorsed by Nintendo, Sega, Sony, Microsoft, or any other such party. Eggcelerate! is a registered trademark of its copyright holder. This site makes no claim to Eggcelerate!, its characters, screenshots, artwork, music, or any intellectual property contained within. Opinions expressed on this site do not necessarily represent the opinion of site staff or sponsors. Staff and freelance reviews are typically written based on time spent with a retail review copy or review key for the game that is provided by its publisher.