Say No! More brings the opposite of 'yes' to Switch, PC and iOS devices this April 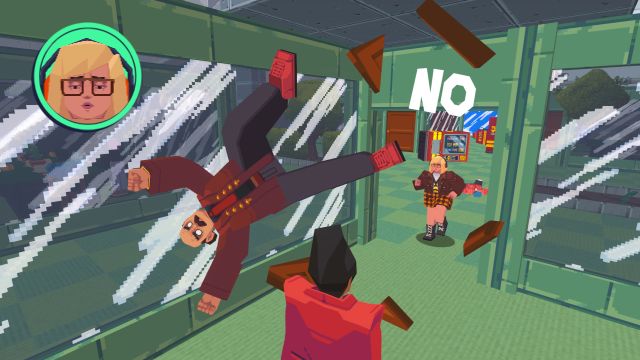 What's that? You're looking for a game that embraces the power of denial? Say No! More.

Thunderfall Publishing announced today that Say No! More, a title it describes as "highly anticipated" and "a NO!-Playing game," is due to arrive next month on Nintendo Switch, iOS, PC and Mac (by way of Steam, in the case of those last two). It comes from Studio Fizbin, a team you may know for its work on The Inner World.

In Say No! More, players occupy a world where the expected answer is "yes." And yet, as a new intern, those players will lead their custom character through a world full of unreasonable requests and will frequently shout "No" in any of several languages. Their reluctance to accommodate will shock unsuspecting coworkers and perhaps even lead to new opportunities. It sounds a bit like Office Space: The Game, if such a thing existed, except on steroids.

"Touching on timeless and modern issues such as social etiquette, friendship and workplace standards, this hilarious adventure has tender depth," reads a press release. "It's all wrapped up in a fun late 90s video game style, complete with chunky, colourful visuals, comical animations and jazzy music that you'll struggle to say 'NO!' to."

I asked one of our illustrious staff writers if he wanted me to request a review key so he could potentially give the game a spin and provide some written impressions for the site, but he said "No" and clearly doesn't need the training. I hope he struggled.

"Say No! More is a clever inversion of typical video game tropes in which your stalwart hero takes on all manner of tasks to help random NPCs with their troubles," said Tyrone Walcott, Product Manager at Thunderful Publishing. "In Say No! More you're excelling through the use of boundaries and self respect. It's a timeless message that you needn't respond in the affirmative to be a real hero."

Thunderful Publishing hopes some folks will decide to buy the game ahead of its release, as a preorder, and is even offering a 10% discount off the game's standard £12.14/13.49/$13.49 MSRP to facilitate such spending. There's also a discount available through the Apple School Manger service that allows educational establishments to save up to 50% off, because apparently someone thinks kids need training on how to say "no." Tell that to any parent who has ever tried to convince a child to clean their room, or a toddler to eat disgusting strained carrots.

If you enjoyed this Say No! More article, you're encouraged to discuss it with the author and with other members of the site's community. If you don't already have an HonestGamers account, you can sign up for one in a snap. Thank you for reading!

© 1998-2021 HonestGamers
None of the material contained within this site may be reproduced in any conceivable fashion without permission from the author(s) of said material. This site is not sponsored or endorsed by Nintendo, Sega, Sony, Microsoft, or any other such party. Say No! More is a registered trademark of its copyright holder. This site makes no claim to Say No! More, its characters, screenshots, artwork, music, or any intellectual property contained within. Opinions expressed on this site do not necessarily represent the opinion of site staff or sponsors. Staff and freelance reviews are typically written based on time spent with a retail review copy or review key for the game that is provided by its publisher.