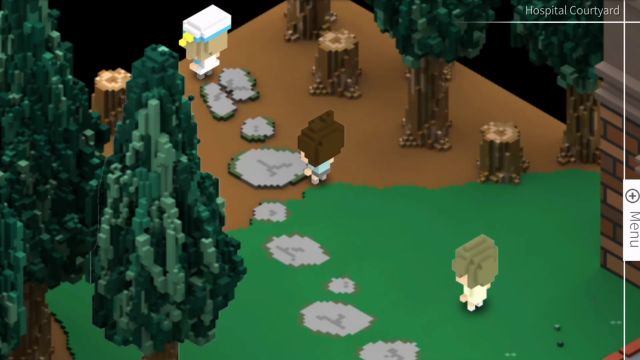 You won't have to wait the full 7 years for your chance to play this unique visual novel on Switch.

7 Years From Now, an award-winning mobile game from Fumi (hiraya-space) and Room 6, is coming to Nintendo Switch in a couple of months, publisher PQube announced today in a press release. That's much earlier than advertised, and the title will also hit Steam on the same day.

Featuring a minimalist voxel art style and darker themes than the visual style might prepare you for, 7 Years From Now introduces high school student Haruto Soraki. He has suffered from an accident he can't remember, and he returns to his hometown in an attempt to remember more about himself.

"In this wonderfully charming yet sinister slice of life adventure," the press release reads, "reacquaint yourself with forgotten friends, discover hidden depths as you expose a horrifying conspiracy and learn the truth of your past once and for all."

7 Years From Now was developed as a "labour of love" by Mafumi Yoshida, and has been awarded and generally liked on both the iOS App Store and Google Play, where it is already available for the phone junkies in the crowd. It originally launched in 2017, so its arrival this year on Switch and Steam is a bit of a surprise.

If a game that touches on mature themes such as bullying, mental health and domestic violence sounds like your cup of tea, make sure to clear a little space in your calendar for 7 Years From Now, just a little over 7 weeks from now.

If you enjoyed this 7 Years From Now article, you're encouraged to discuss it with the author and with other members of the site's community. If you don't already have an HonestGamers account, you can sign up for one in a snap. Thank you for reading!

© 1998-2021 HonestGamers
None of the material contained within this site may be reproduced in any conceivable fashion without permission from the author(s) of said material. This site is not sponsored or endorsed by Nintendo, Sega, Sony, Microsoft, or any other such party. 7 Years From Now is a registered trademark of its copyright holder. This site makes no claim to 7 Years From Now, its characters, screenshots, artwork, music, or any intellectual property contained within. Opinions expressed on this site do not necessarily represent the opinion of site staff or sponsors. Staff and freelance reviews are typically written based on time spent with a retail review copy or review key for the game that is provided by its publisher.