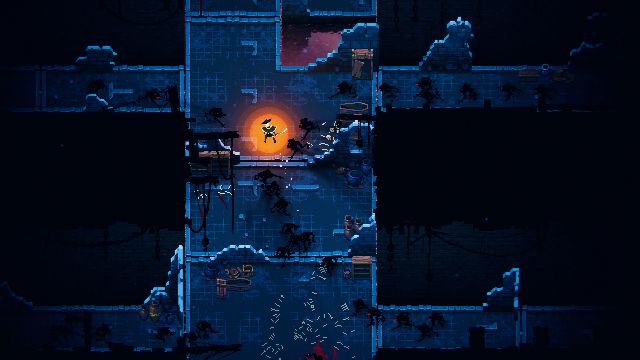 You'll be able to move the land around you like so many Tetris blocks.

There is a Slovakian game development studio called straka.studio, and it got some assistance from the Slovak Arts Council to bring to life a unique vision. Now planned for release on Xbox and PC later this year from publisher Superhot Presents, that vision has taken the form of a game called Loot River.

In Loot River, players journey an otherworldly river in search of knowledge and, of course, loot. They explore procedurally-generated labyrinths in traditional action-RPG style, dealing with roguelike elements that should keep everything irresistibly difficult.

Thanks to the power of the Relic, players are able to reshape the earth, moving various ruins as if they are tiles in a puzzle. This skill will no doubt come in handy as they outsmart monsters and bosses and seek assistance from fellow travelers. Naturally, they'll grab plenty of loot along the way.

"We are deeply interested in games focused on transformation of the world, as it is a powerful mechanic rarely used in gaming," said Miro Straka, who almost has to be a very important person at straka.studio. "While my previous games, Euclidean Lands and Euclidean Skies, were centered around rotations, this one explores a more natural mechanic - movement. Loot River offers a similar theme of shaping the world, but it's a far more kinetic affair that should appeal to fans of games like Dead Cells and Rogue Legacy."

The roguelike is by now a popular genre, but the ability to move the dungeons does sound like it could definitely add a new dimension to the familiar experience. And anything that allows a PR person to write "Dark Souls meets Tetris" in a press release has to be worth something, right?

If you enjoyed this Loot River article, you're encouraged to discuss it with the author and with other members of the site's community. If you don't already have an HonestGamers account, you can sign up for one in a snap. Thank you for reading!

© 1998-2021 HonestGamers
None of the material contained within this site may be reproduced in any conceivable fashion without permission from the author(s) of said material. This site is not sponsored or endorsed by Nintendo, Sega, Sony, Microsoft, or any other such party. Loot River is a registered trademark of its copyright holder. This site makes no claim to Loot River, its characters, screenshots, artwork, music, or any intellectual property contained within. Opinions expressed on this site do not necessarily represent the opinion of site staff or sponsors. Staff and freelance reviews are typically written based on time spent with a retail review copy or review key for the game that is provided by its publisher.