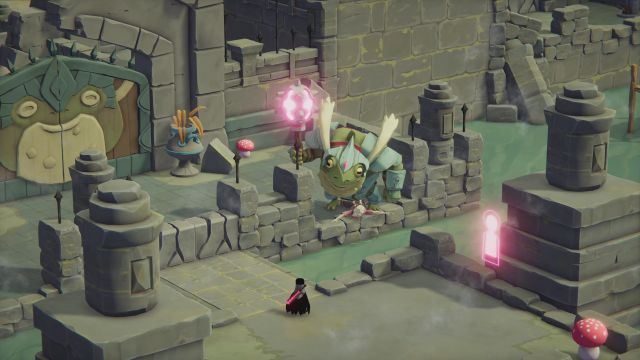 It looks like some monsters who said they could take down a reaper of souls will be eating crow this Summer.

Devolver Digital, frequent publisher of games that in some way involve birds, today announced it will publish an action-adventure title called Death's Door. The title is due to arrive on Xbox One, Xbox Series X|S and PC this Summer.

Starring a crow who is one of numerous birds that collect the souls of those who have shuffled off this mortal coil, Death's Door is an action-adventure outing from the team at Acid Nerve. You might well remember that older title with fondness, as it seems to have gone over well with a lot of the relatively few people who played it.

"We can rebuild them," said Devolver Digital CFO Fork Parker. "We have the technology. We can make them better than they were. Better, stronger, faster. And hopefully more profitable."

The business of reaping souls in Death's Door sounds rather treacherous, so a better model of bird can only be a good thing. You'll explore a world of twisted inhabitants and myriad secrets, bringing hope to its residents and slaying beasties known as tyrants using melee weapons, arrows and magic. Despite the intriguing world building, this is ultimately an old-fashioned sort of game where it looks like reflexes and skill matter most of all.

Death's Door was revealed as part of today's ID@Xbox Twitch Gaming Showcase, and it looks plenty intriguing to me. This Summer is shaping up to be an exciting time to be a gamer, don't you think?

If you enjoyed this Death's Door article, you're encouraged to discuss it with the author and with other members of the site's community. If you don't already have an HonestGamers account, you can sign up for one in a snap. Thank you for reading!

© 1998-2021 HonestGamers
None of the material contained within this site may be reproduced in any conceivable fashion without permission from the author(s) of said material. This site is not sponsored or endorsed by Nintendo, Sega, Sony, Microsoft, or any other such party. Death's Door is a registered trademark of its copyright holder. This site makes no claim to Death's Door, its characters, screenshots, artwork, music, or any intellectual property contained within. Opinions expressed on this site do not necessarily represent the opinion of site staff or sponsors. Staff and freelance reviews are typically written based on time spent with a retail review copy or review key for the game that is provided by its publisher.