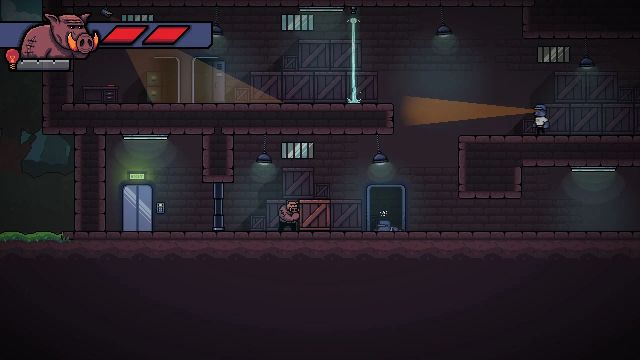 A duck, a pig and a gorilla walk into a bank. To rob the place. It goes wrong. Next up: a prison break?

The setup involves a duck, a pig and a gorilla, so you might suppose cute things would happen from there. But these are no ordinary animals, as they sport six-pack abs and glowering countenances, to say nothing of their criminal ambitions.

So anyway, they're in jail and your job is to break them out of the joint. You'll hide from guards, find key cards to pass through locked doors, and avoid "pitfalls" as you navigate 60 levels that lie between you and the sweet, sweet taste of freedom you don't deserve.

That's mostly all there is to know, except that the characters have unique abilities no doubt extremely important as you solve puzzles along the way. And the MSRP is 4.99 $ /  on every platform, and the release date is March 26 in both North America and Europe. You can download it later this week, in other words, and you won't even have to rob a bank to pay for it!

If you enjoyed this One Escape article, you're encouraged to discuss it with the author and with other members of the site's community. If you don't already have an HonestGamers account, you can sign up for one in a snap. Thank you for reading!

© 1998 - 2022 HonestGamers
None of the material contained within this site may be reproduced in any conceivable fashion without permission from the author(s) of said material. This site is not sponsored or endorsed by Nintendo, Sega, Sony, Microsoft, or any other such party. One Escape is a registered trademark of its copyright holder. This site makes no claim to One Escape, its characters, screenshots, artwork, music, or any intellectual property contained within. Opinions expressed on this site do not necessarily represent the opinion of site staff or sponsors. Staff and freelance reviews are typically written based on time spent with a retail review copy or review key for the game that is provided by its publisher.