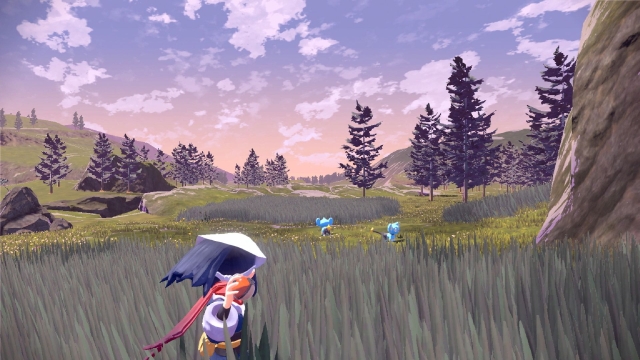 The new game will let you explore the Sinnoh region like never before, but you'll have to wait a bit.

Today's Pokémon Direct included the surprise reveal of Pokémon Legends: Arceus, a brand new Pokémon game set within the familiar Sinnoh region. This is a Pokémon experience not entirely like any you've seen before it, though, and you shouldn't expect to get your hands on it until sometime next year.

According to a press release, Pokémon Legends: Arceus "was developed with the desire to deliver an experience infused with new action and RPG elements that go beyond the framework established thus far, while honoring the core gameplay of past Pokémon titles."

Looking at the limited footage currently available for Pokémon Legends: Arceus, it does look an awful lot like the sort of thing people were extremely vocal about wanting from the franchise as they criticized Pokémon Sword and Shield for perceived shortcomings.

Players will explore a beautifully realized world, complete with vistas that look like something out of The Legend of Zelda: Breath of the Wild. In stead of hunting down Ganon, however, they'll sneak up on wild Pokémon and attempt to catch them with well-timed Poké Ball tosses. This then leads to traditional turn-based battles, with previously captured Pokémon serving as allies.

Trainers embarking on their quest to create the regions first Pokédex can choose one of three starters: Rowlet (grass), Cyndaquil (fire) or Oshawott (water). The Legendary Pokémon of the moment is Arceus, which gives you an idea how the game got its title.

2022 suddenly feels a long way off, but it's nice to know something new and exciting is on its way within the Pokémon universe. If you would like to learn more about the game, make sure you check out the official Pokémon Legends: Arceus site and watch the first trailer. Are you ready to catch 'em all, trainer?

If you enjoyed this Pokémon Legends: Arceus article, you're encouraged to discuss it with the author and with other members of the site's community. If you don't already have an HonestGamers account, you can sign up for one in a snap. Thank you for reading!

© 1998-2021 HonestGamers
None of the material contained within this site may be reproduced in any conceivable fashion without permission from the author(s) of said material. This site is not sponsored or endorsed by Nintendo, Sega, Sony, Microsoft, or any other such party. Pokémon Legends: Arceus is a registered trademark of its copyright holder. This site makes no claim to Pokémon Legends: Arceus, its characters, screenshots, artwork, music, or any intellectual property contained within. Opinions expressed on this site do not necessarily represent the opinion of site staff or sponsors. Staff and freelance reviews are typically written based on time spent with a retail review copy or review key for the game that is provided by its publisher.