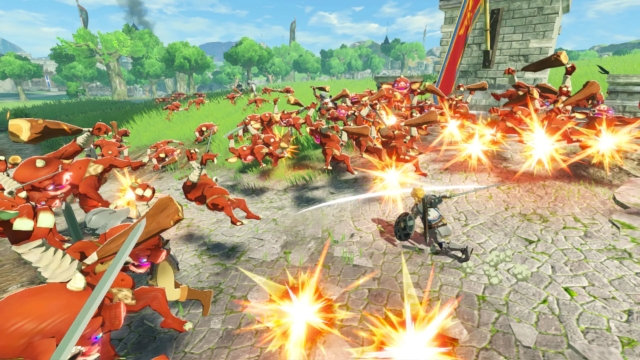 The next Zelda-related adventure arrives on Nintendo Switch this November.

Nintendo today announced Hyrule Warriors: Age of Calamity, a new installment in the offshoot series that this time centers on the Hyrule that existed 100 years before the events depicted in The Legend of Zelda: Breath of the Wild. The surprise title will be released physically and digitally on November 20, 2020.

According to a press release, the game "stars recognizable characters from The Legend of Zelda: Breath of the Wild like Link and Zelda, as well as other characters like the four Champions, who will be playable for the very first time in the Hyrule Warriors series."

As you might expect, development is handled by the team at Omega Force and will focus on combos and special abilities used in a battlefield teeming with slashable foes. Action comes fast and furious, but with a strategic element, which caters to those who like their Zelda with a little more swordplay and a lot less exploration and dungeon crawling. Such people do indeed exist.

"In addition to hacking and slashing their way through swarms of enemies to defend Hyrule," promises the press release, "players will also solve environmental puzzles, unlock weapons and skills, craft materials, visit shops to obtain items and use the power of the Sheikah Slate."

Hyrule Warriors: Age of Calamity is what you might call a tentpole release, the successor on Nintendo Switch to Hyrule Warriors: Definitive Edition (itself a port of the Wii U original). Its release will ensure another calendar year passes without a total absence of a new Zelda offering, with the proper follow-up to The Legend of Zelda: Breath of the Wild likely not happening until late next year or later.

Nintendo has also made available a six-minute presentation that introduces the game and shows of its art style and some gameplay, which we've embedded above. Make sure to check it out if you'd like to see the game in action and make a decision about possibly purchasing it this holiday. There's also an official Hyrule Warriors: Age of Calamity website, though details are a little scarce for now.

If you enjoyed this Hyrule Warriors: Age of Calamity article, you're encouraged to discuss it with the author and with other members of the site's community. If you don't already have an HonestGamers account, you can sign up for one in a snap. Thank you for reading!

© 1998-2021 HonestGamers
None of the material contained within this site may be reproduced in any conceivable fashion without permission from the author(s) of said material. This site is not sponsored or endorsed by Nintendo, Sega, Sony, Microsoft, or any other such party. Hyrule Warriors: Age of Calamity is a registered trademark of its copyright holder. This site makes no claim to Hyrule Warriors: Age of Calamity, its characters, screenshots, artwork, music, or any intellectual property contained within. Opinions expressed on this site do not necessarily represent the opinion of site staff or sponsors. Staff and freelance reviews are typically written based on time spent with a retail review copy or review key for the game that is provided by its publisher.