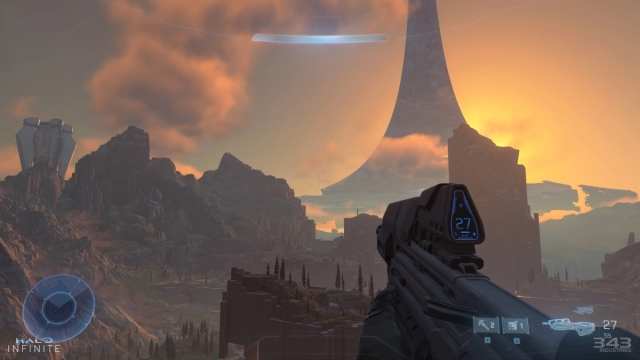 Halo Infinite isn't going to deploy this calendar year after all.

Earlier today, the official Halo account on Twitter released a "development update" on Twitter, announcing that Halo Infinite, the eagerly anticipated next shooter in the beloved Halo franchise, is no longer planned for release in 2020.

An official notice, which is also embedded below, outlines the reasoning behind the change. 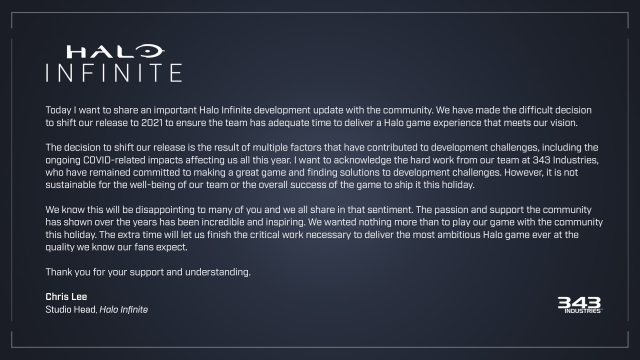 Chris Lee is the studio head in charge of the Halo Infinite project, which means this news (though admittedly disappointing) is definitely official. Fans who were anxiously awaiting the game's availability near the Xbox Series X launch will simply have to find something else to play while they wait for 343 Industries employees to finish polishing the game so it can shine like the diamond we all want it to be.

"We wanted nothing more than to play our game with the community this holiday," Lee notes near the end of his unfortunate announcement. "The extra time will let us finish the critical work necessary to deliver the most ambitious Halo game ever at the quality we know our fans expect."

Microsoft gave fans an early look (the first really meaty one) at Halo Infinite this July, and the response from fans was somewhat muted compared to what one might expect. The game looks ambitious, but not necessarily as pretty as some might have hoped for given everything that is likely to be happening on-screen at once. Perhaps that is one of the things 343 Industries will look to address with the additional development time.

"The decision to shift our release is the result of multiple factors that have contributed to development challenges, including the ongoing COVID-related impacts affecting us all this year," Lee said, adding that "It is not sustainable for the well-being of our team or the overall success of the game to ship it this holiday."

Game developers and publishers have recently come under fire for development in "crunch," which forces team members to put in long hours and endure a great deal of stress (not to mention time away from their families) in order to hit deadlines. Such an environment is difficult and creatively challenging even in the best of times, and during a pandemic is especially unwise.

What do you think? Have 343 Industries and Microsoft made the right call by pushing the game back into the next calendar year? Are you still anxious to get your hands on Halo Infinite? Does this change impact your interest in the Xbox Series X hardware?

If you enjoyed this Halo Infinite article, you're encouraged to discuss it with the author and with other members of the site's community. If you don't already have an HonestGamers account, you can sign up for one in a snap. Thank you for reading!

© 1998-2021 HonestGamers
None of the material contained within this site may be reproduced in any conceivable fashion without permission from the author(s) of said material. This site is not sponsored or endorsed by Nintendo, Sega, Sony, Microsoft, or any other such party. Halo Infinite is a registered trademark of its copyright holder. This site makes no claim to Halo Infinite, its characters, screenshots, artwork, music, or any intellectual property contained within. Opinions expressed on this site do not necessarily represent the opinion of site staff or sponsors. Staff and freelance reviews are typically written based on time spent with a retail review copy or review key for the game that is provided by its publisher.