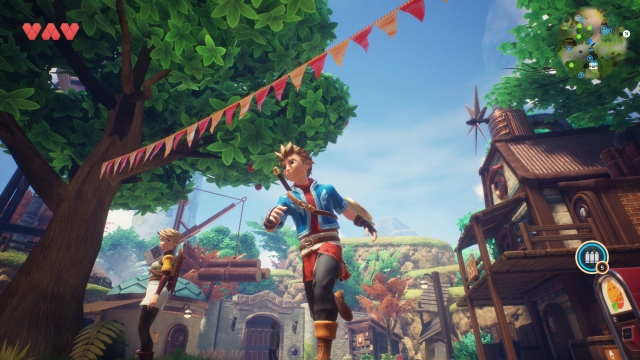 Hack and slash your way through the Apple Arcade prequel, now on Nintendo Switch.

Oceanhorn 2: Knights of the Lost Realm, a prequel to Oceanhorn: Monsters of Uncharted Seas, is headed to Nintendo Switch this Fall, developer Cornfox & Brothers announced today. A previous version of the game has been available on Apple Arcade since last year, where it seems mostly to have pleased critics.

Oceanhorn 2 features a 3D world with an expansive landscape that's ripe for exploration and hacking and slashing, rather obviously inspired by various entries in The Legend of Zelda franchise. The visual style, for instance, seems to have taken a few notes from Breath of the Wild.

"Oceanhorn 2: Knights of the Lost Realm is a game made by Nintendo fans, for Nintendo fans," according to Heikki Repo, the creative director at Cornfox & Brothers. "We've been able to create something new from the strong background that we established with our previous game, Oceanhorn: Monster of Uncharted Seas, and Oceanhorn 2 is our love letter to the games that we grew up with, combining that beloved nostalgia with exciting new mechanics to give it an original spin."

In the prequel, you'll adventure with a young knight and help defend Arcadia from Warlock Mesmeroth and his army. Coming along for the ride are Trin, granddaughter of Archimedes, and Gen, a mysterious robot who did not train Ryu of Street Fighter II. It's a different Gen.

Using contextual commands, you'll control characters and solve puzzles, fight in tactical battles and enjoy hack 'n slash combat while traversing a "Zelda-esque" open world landscape. There are reportedly around 20 hours of content to keep you busy, which sounds like enough to thoroughly scratch the itch but not so much that you have time to get sick of anything.

If you would like a first look at the game's Switch version in action, make sure to check out the video embedded above, or head on over to the official Oceanhorn site for more details from the developer. Viva la Arcadia!

If you enjoyed this Oceanhorn 2: Knights of the Lost Realm article, you're encouraged to discuss it with the author and with other members of the site's community. If you don't already have an HonestGamers account, you can sign up for one in a snap. Thank you for reading!

© 1998-2021 HonestGamers
None of the material contained within this site may be reproduced in any conceivable fashion without permission from the author(s) of said material. This site is not sponsored or endorsed by Nintendo, Sega, Sony, Microsoft, or any other such party. Oceanhorn 2: Knights of the Lost Realm is a registered trademark of its copyright holder. This site makes no claim to Oceanhorn 2: Knights of the Lost Realm, its characters, screenshots, artwork, music, or any intellectual property contained within. Opinions expressed on this site do not necessarily represent the opinion of site staff or sponsors. Staff and freelance reviews are typically written based on time spent with a retail review copy or review key for the game that is provided by its publisher.