Preview: Ary and the Secret of Seasons 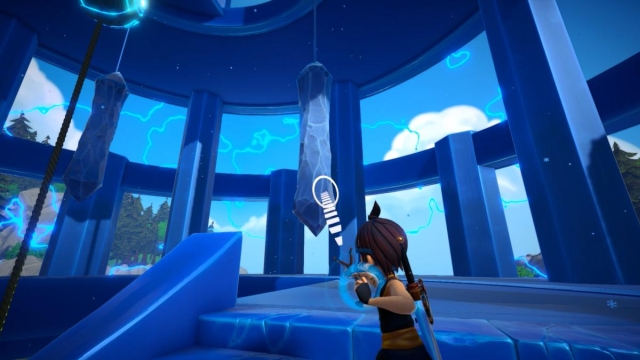 We get some hands-on time with the upcoming adventure game featuring a plucky young hero.

Ary and the Secret of Seasons, due a little later this year on PC, Switch, PlayStation 4 and Xbox One, is an adventure game with the sort of twist people love these days: you're not an amnesiac young boy who has an impressive birthright that grants you the unique qualifications necessary to save the world. You're more like that boy's kid sister. And you've still got a world to save, because some things don't change.

In this case, the world needing saving is a pretty awesome one known as Valdi. There, four regions are locked eternally in one of the four seasons, each with a corresponding guardian. Or they would be, except something is throwing all of that order into disarray. As Aryelle, the daughter of the Guardian of Winter and the younger sibling of the heir apparent, your only job is theoretically to stand around looking pretty as you grow into a woman of substance. Maybe you can even score a date with the local hottie, Prince Crocus? But you've never been one to believe in theories. Your brother is missing, your father has fallen into a deep depression, and there's enough new mayhem making its way through each of the four regions that it's clear something very bad is about to happen soon. You decide to take matters into your own hands. You chop off your long hair so you'll pass as your brother (and fool virtually no one sober who witnesses the result) before setting out on an adventure that will find you wrangling seasons, battling monsters, solving puzzles and just generally having a heroic time.

It's clear the developers at eXiin and Fishing Cactus have at least a passing familiarity with the likes of The Legend of Zelda. While definitely a distinct outing, Ary and the Secret of Seasons borrows the general feel Nintendo's games (and some of the better third-party stuff from the PS2 library) went for. The world is suitably dark and menacing, but unlikely to go too far in that direction with Ary on the job.

You'll need to solve puzzles and defeat monsters to advance through dungeons, but there's a lot of freedom to run around and find hidden loot within those environments. In the first dungeon, I was already using Ary's ability to manipulate the world around her using a magical crystal that let her turn everything to ice and thus produced new platforms necessary to climb to other areas. I even froze an enemy and turned him into a block that I set on a switch to open a door. My activities felt very Zelda-esque.

Combat, though rather infrequent at least in the game's opening areas, already feels like it could provide some real substance. Ary is able to roll to dodge attacks, can unleash a flurry of standard strikes and can also counter a blow to leave a foe temporarily stunned. I faced off against several enemies in and around that first dungeon, including a few heavily armored types capable of taking more damage than their subordinates. Sometimes, a healer would stay near the perimeter, undoing the damage I inflicted, which means players are required to prioritize targets if they want to get far, even in the early going. Gold coins scattered in chests around the world can also be used to purchase ability upgrades and armor, adding just that little bit of RPG sensibility.

Ary has several chunks on her life meter, and I was able to find fruit when I needed a bit of a refill. In dungeons, I didn't have to backtrack far when I sometimes got sloppy and lost a fight. There seems to be a solid checkpoint system in place to avoid unnecessary frustration, so hopefully that holds true as the campaign progresses. Outside of labyrinths, objectives were presented frequently and marked on a map. At one point I had to sneak past some guards using a special creeping movement. I suspect there will be similar and more demanding later in the campaign. Somewhere in the world, there must be people who adore stealth segments. Otherwise, I don't see why developers would insist on including them in games that would be better off without them. But whatever. At least nothing I experienced in Ary and the Secret of the Seasons was too awful to tolerate. And as I've noted, checkpoint placement is generous.

The camera also deserves some discussion, though it hasn't won me over quite as much as some of the game's more pleasing aspects. I played on Steam, using an Xbox 360 controller I save for such occasions, and the camera was easy to manipulate with the right analog stick. But there were a lot of places where Ary got a bit lost in the window dressing along the edges of areas she is allowed to explore. The camera, though easy enough to maneuver, requires a little more persistent attention than I am accustomed to. It also tends to do a poor job in confined quarters, sticking a little too close to the action for me to see things. There's a targeting system in combat, which helps. I found I had issues most often in a segment where I had to climb a circular tower and locate platforms to help with my ascent. It wasn't a difficult challenge, except the view was a bit on the wonky side.

Finally, one other thing I would like to mention is that the game presents its plot quite well, in much the nature of a Nickelodeon cartoon. Ary is an immediately likable protagonist, voiced by an actress who gets tonal inflection just right. The lines of dialogue for other characters are for the most part smartly written and are performed acceptably or better, depending on who has something to say. Voice work adds a lot to each of the characters, as do expressive models that do a lot with their faces to tell you what everyone is thinking. You can skip sequences if you like, but I recommend watching them at least the first time because they're actually quite enjoyable. I don't think anyone will ever mistake any of this stuff for a Disney/Pixar production, but the folks responsible have definitely done a good job.

Ary and the Secret of Seasons is a fun 3D platformer/adventure game with a lot of promise, despite some regrettable rough edges that I wouldn't be particularly surprised to see linger even after retail release. If you've been searching for another compelling adventure game, you may have finally found it. The developers deserve praise for taking the time to develop a properly engaging world for a capable young heroine to explore, and I suspect a lot of people will focus on that uncommon achievement. It's nice that younger girls will have an adventure of this sort (besides Gurumin, which came out most of 15 years ago now) that they can enjoy without playing as a boy. More pleasing still is the discovery that--at least as far as I can tell--they don't have to sacrifice much in the way of quality for the privilege. This isn't a Zelda killer, but it's shaping up to be well worth your time even without a fatality. I suggest giving it a look when you get the chance.

If you enjoyed this Ary and the Secret of Seasons article, you're encouraged to discuss it with the author and with other members of the site's community. If you don't already have an HonestGamers account, you can sign up for one in a snap. Thank you for reading!

© 1998-2021 HonestGamers
None of the material contained within this site may be reproduced in any conceivable fashion without permission from the author(s) of said material. This site is not sponsored or endorsed by Nintendo, Sega, Sony, Microsoft, or any other such party. Ary and the Secret of Seasons is a registered trademark of its copyright holder. This site makes no claim to Ary and the Secret of Seasons, its characters, screenshots, artwork, music, or any intellectual property contained within. Opinions expressed on this site do not necessarily represent the opinion of site staff or sponsors. Staff and freelance reviews are typically written based on time spent with a retail review copy or review key for the game that is provided by its publisher.