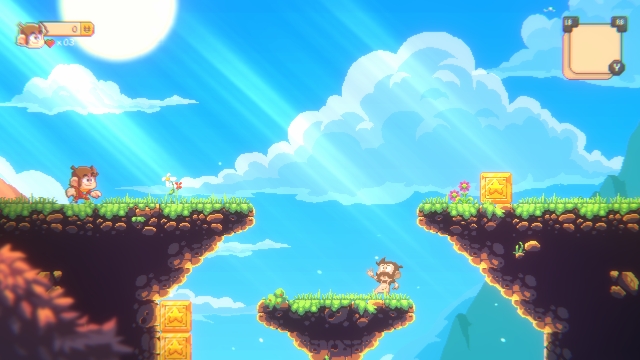 Alex Kidd's original adventure is coming to PC and consoles with new levels and modes.

Alex Kidd in Miracle World DX is headed to PC and consoles, publisher Merge Games announced Wednesday. Developed by Jankenteam, a Spanish development team "created for the occasion," the platformer marks the first appearance for Alex Kidd since his appearance in a retro compilation for Xbox 360 and PlayStation 3 in 2012.

According to a video and press release, Alex Kidd in Miracle World DX features include a "Classic Mode" that functions "the same as the original Master System version." Players who want everything to look more like current fare are also in luck, meaning you're covered no matter your preference.

Other features include controls the publisher promises are tighter and more fluid, new modes (including a Boss Rush mode) and even new levels that "expand the lore of the original." Boss fight mechanics have also been improved to make combat more intuitive, and the game includes both reimagined music tracks and remastered editions familiar to those who played the original version.

Check out the video embedded above if you would like a first look at Alex Kidd in Miracle World DX in action, and we'll try to keep you in the loop if there are any new and exciting developments ahead of its vague release date at some point down the road. Are you excited for Alex Kidd's return?

If you enjoyed this Alex Kidd in Miracle World DX article, you're encouraged to discuss it with the author and with other members of the site's community. If you don't already have an HonestGamers account, you can sign up for one in a snap. Thank you for reading!

© 1998-2021 HonestGamers
None of the material contained within this site may be reproduced in any conceivable fashion without permission from the author(s) of said material. This site is not sponsored or endorsed by Nintendo, Sega, Sony, Microsoft, or any other such party. Alex Kidd in Miracle World DX is a registered trademark of its copyright holder. This site makes no claim to Alex Kidd in Miracle World DX, its characters, screenshots, artwork, music, or any intellectual property contained within. Opinions expressed on this site do not necessarily represent the opinion of site staff or sponsors. Staff and freelance reviews are typically written based on time spent with a retail review copy or review key for the game that is provided by its publisher.