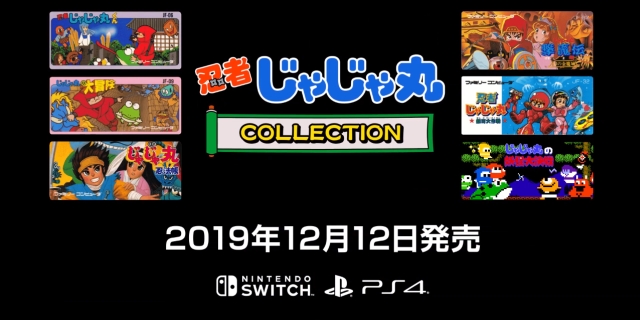 The forthcoming compilation includes five titles in the long-running series, plus an all-new entry.

Dispatch Games today announced it has begun accepting preorders for Ninja JaJaMaru Collection, a Switch and PlayStation 4 compilation that includes six games in the long-running series. A premium physical edition retails for $99.99 USD, and is available to order immediately.


Like its original developer, the Ninja JaJaMaru series has largely remained dormant since the early 90s, when Jaleco was at the peak of its power. The chance to jump back into a familiar series is bound to please Japanese gamers, and also North American ones who may have enjoyed a slight taste of the series when one of the titles was localized for Virtual Console.

The "limited edition" noted above includes a variety of swank content, including a Japanese copy of the game, a soundtrack with selections from across the various games (with a theme song performed by Japanese hip-hop artist MCU), never-before-seen developer documents, a ramen bowl with soup spoon and a rubber strap. No one can ever have too many rubber straps. Also, there is a 2-inch coin paying homage to Jalecoins you'll collect in the game.

From what I can tell, the game has not been announced for release in North America at this time. Presumably, you'll want to be able to read limited Japanese in order to advance through the games, though I've reached out to Dispatch Games for clarification and will update that post if I hear back with information to the contrary. Dispatch Games assures purchasers on the site that it "works on all systems sold worldwide, however, a online regional account may be required for online and DLC features."

Head over to the official site if you would like to place a preorder today. Funds will be collected immediately, though the game is not expected to release and ship until December 12, 2019. Are you Ninja JaJaMaru enough?!

If you enjoyed this Ninja JaJaMaru Collection article, you're encouraged to discuss it with the author and with other members of the site's community. If you don't already have an HonestGamers account, you can sign up for one in a snap. Thank you for reading!

© 1998-2021 HonestGamers
None of the material contained within this site may be reproduced in any conceivable fashion without permission from the author(s) of said material. This site is not sponsored or endorsed by Nintendo, Sega, Sony, Microsoft, or any other such party. Ninja JaJaMaru Collection is a registered trademark of its copyright holder. This site makes no claim to Ninja JaJaMaru Collection, its characters, screenshots, artwork, music, or any intellectual property contained within. Opinions expressed on this site do not necessarily represent the opinion of site staff or sponsors. Staff and freelance reviews are typically written based on time spent with a retail review copy or review key for the game that is provided by its publisher.