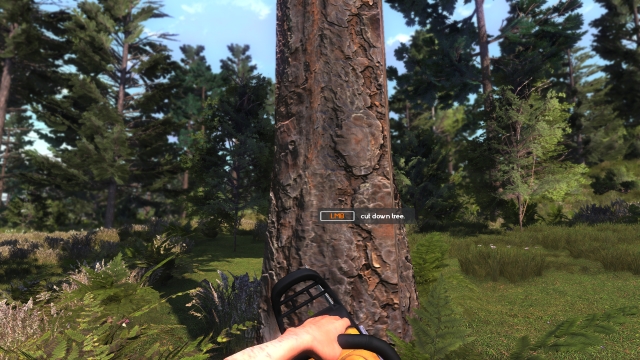 Fall, fall, fall. That's what trees will be doing in a new simulation title that brings the forest to your PC this fall.

Toplitz Productions has announced it will bring Lumberjack's Dynasty to Steam Early Access on November 21, 2019, just in time for all you virtual lumberjacks to bring the dream home for Christmas. The Austrian developer tries to provide "heart and soul," and what could possibly be more soulful than a game about the brave men and women who cut down trees and turn them into boards?

According to a press release, Lumberjack's Dynasty will allow players to "enjoy an outdoorsy lifestyle" (because this isn't a job typically done in one's living room), which will entail turning the family logging business into a big deal of the sort that spans generations. Players will restore an inherited family farmhouse to its former glory, sort of like Harvest Moon but with more trees and (one assumes) less wooing of the eligible local lasses and gents.

"We are proud to unveil Lumberjack's Dynasty, a game that we think both veterans and newcomers to the life-simulation genre will appreciate for its unique gameplay features," said Robin Gibbels of Toplitz Productions. "The game is more than just a 'job simulation,' it offers players a chance to enjoy building a family-owned business from the ground up!"

The same press release promises a combination of role-playing game elements and a "classic forestry simulation game," and to me it all looks quite a bit like Farming Simulator. That's a successful franchise from a different developer, so maybe this forest-bound take on the genre will do similarly well for Toplitz Productions.

If you've always wanted to grab a virtual chainsaw and go to town on some giant trees, or turn logs into lumber or any number of related activities, the game could be one to watch later this year. And speaking of watching, you can watch the trailer embedded above to get a first look at the game in action and hear a gruff narrator outline just what you should expect this November. Tim-BURRRRR!

If you enjoyed this Lumberjack Dynasty article, you're encouraged to discuss it with the author and with other members of the site's community. If you don't already have an HonestGamers account, you can sign up for one in a snap. Thank you for reading!

© 1998-2021 HonestGamers
None of the material contained within this site may be reproduced in any conceivable fashion without permission from the author(s) of said material. This site is not sponsored or endorsed by Nintendo, Sega, Sony, Microsoft, or any other such party. Lumberjack Dynasty is a registered trademark of its copyright holder. This site makes no claim to Lumberjack Dynasty, its characters, screenshots, artwork, music, or any intellectual property contained within. Opinions expressed on this site do not necessarily represent the opinion of site staff or sponsors. Staff and freelance reviews are typically written based on time spent with a retail review copy or review key for the game that is provided by its publisher.